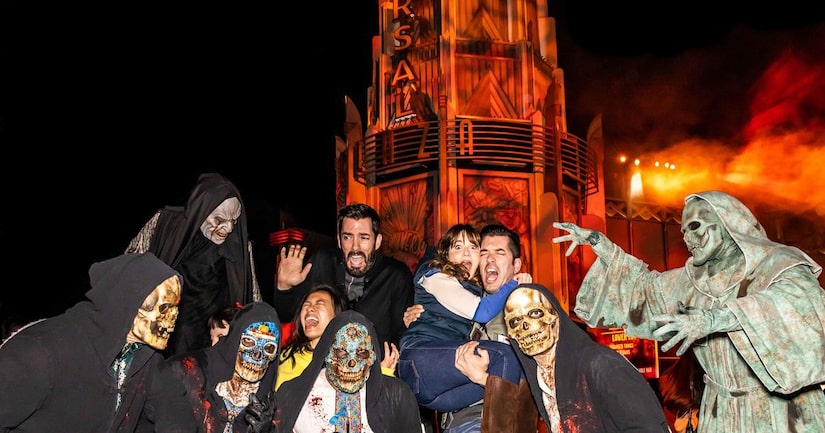 Along with a photo of Jonathan carrying her in his arms, Zooey wrote on Instagram, “Still processing how scared I was of these people dressed in spooky masks. @unistudios@horrornights #UniversalHHN.”

Just a few weeks ago, Zooey, Jonathan, Drew and Linda attended a taping of “Dancing with the Stars.”

A source told Us Weekly, “Jonathan moved his chair closer to Zooey and put his arm around her as he whispered closely in her ear. They appeared very comfortable together and looked sweet.”

The insider added, “[The two couples] were seen chatting on the ballroom floor. At one point, Jonathan noticed something in Zooey's hair and reached to get it out. He had his arm around her and was holding her close. Zooey had her arm around his waist. Jonathan appeared protective over her and they looked very cozy.”

Zooey and Jonathan first sparked rumors last month after they were seen walking hand in hand in Silverlake.

An insider told Hollywood Life of their date at Little Dom's restaurant, "Zooey and Jonathan kept looking at each other and smiling and sat closely, cuddling constantly throughout their meal. They looked very happy and casual."

Zooey, 39, and Jonathan, 41, met filming a "Carpool Karaoke" segment with James Corden in August. At the time, Zooey had come out of her four-year marriage to Jacob Pechenik, with whom she has a daughter, Elsie, 4, and a son, Charlie, 2.

Jonathan was previously married to Kelsy Ully from 2007-2010, and last year was dating Jacinta Kuznetsov.