After news broke that Mathew Knowles was battling breast cancer, “Extra's” Billy Bush sat down with movie legend Richard Roundtree, who opened up about his own breast cancer diagnosis.

The original “Shaft” star is now a cancer survivor after he found a lump on his chest while working in Costa Rica in 1993. The self-described “hypochondriac,” said he was in the shower when he felt something on his chest. He thought to himself “that's strange.”

Roundtree continued, “We finish a week later, and I come back to Los Angeles and I went to my doctor. He said, 'Ah, Richard, what now?' He said, 'It's probably nothing, while you are here, let me stick a needle in there and take a biopsy.”

The 77-year-old actor went on, “Four or five days later, he calls me up and said, 'Richard, I need you to come in, we need to talk.'” He shared, “I went in and he's telling me… 'You have cancer,' and I hear this, 'You have breast cancer.' Wait, how could that be? I'm a male, breast cancer? And I thought he was questioning my manhood or something, how could I possibly have breast cancer?”

Richard went public about his story years later. Billy asked, “Was there shame over it?” Roundtree said, “I don't know if it was shame…” Billy wondered if maybe it was “embarrassment?” Richard replied, “Embarrassment.” He added his thought at the time had been, “C'mon, how could I have breast cancer?”

Richard detailed what he dealt with, saying it affected “my chest, the left side, and there's no feeling under the arm."

Roundtree had a mastectomy, “I'm not a real beach person to begin with, but taking off my top is an issue.” He went on to say, “I still look in the mirror as I pass the mirror in the morning out of the shower (points to chest) and there's no feeling under the arm — I still have issues.”

He has found "maybe 15" other men who have also had a mastectomy. Roundtree revealed “Coming out of the closet about my breast cancer episode, that was an eye-opener for me because I really got to experience the fact that men are so cavalier about their health issues and want to sweep it under the rug… So I came out about it and the response was incredible.” 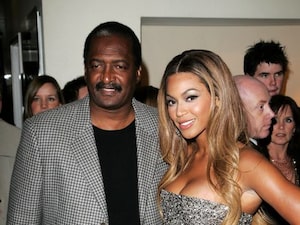 Mathew Knowles on Breast Cancer Diagnosis, Plus: He Breaks News About Destiny’s Child

His story also helped others. “I was going to work up in Vancouver and the flight attendant… as I'm boarding, she says, 'Oh, Mr. Roundtree, you saved my husband's life.'”

“People come up to me and say, 'I'm a breast cancer survivor,' and there's an automatic camaraderie — fellow warrior, we're here.”