It looks like “Without You” singer Halsey is officially over her relationship with rapper G-Eazy.

Halsey has been linked to British rocker Yungblud for more than a month and she seems to have confirmed the romance!

On Thursday, Halsey posted a photo of Yungblud wrapping his arms around her while they took a stroll in London's Camden neighborhood.

She captioned the sweet pic, “camden: now with a cuter filter.”

Last month, Halsey posted a photo of Yungblud resting his head on her shoulder.

They first sparked rumors in November when they left Milk Studios together in Hollywood. At the time, a source denied that they were anything serious, telling E! News, “Halsey is not dating anyone seriously at the moment. Her and Yungblud have known each other through friends and have been recently hanging out. It's very casual."

The insider added, “Halsey is definitely putting herself out there and is keeping busy, but is not ready to be in a serious relationship. She is focusing a lot on her music and wants to have a really successful album and isn't rushing to be with anyone right now." 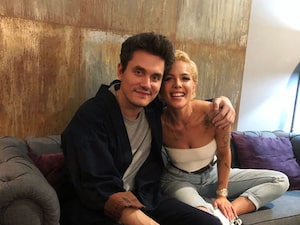 Halsey recently shut down rumors that she was dating John Mayer, insisting they are just good friends.