Comedian Jim Carrey is headed back to TV!

Along with discussing his role as Steve Pickles, the host of “Mr. Pickles' Puppet Time” on his Showtime series “Kidding,” Carrey also spoke with “Extra's” Terri Seymour about politics.

Weighing in on the current Supreme Court confirmation hearings for Brett Kavanaugh, Jim referred to the Senate's refusal to hold hearings on past SCOTUS nominee Merrick Garland, emphasizing, “It's insanely unfair that we never got a chance to put someone on the Supreme Court while we were in power. I think that needs to be righted, in the first place. If it were me — and I'm certainly not threatening to do this — I would burn down the f*cking building before I let them pass that Supreme Court justice.”

Jim recently promised to pull out of a speaking engagement at the New Yorker Festival after finding out Steve Bannon, former chief strategist for Donald Trump, was the headliner. Since Bannon won't be attending after many on social media objected to him as an extremist, Jim will be there. He said, “I plan to do it, yeah. I just wouldn't want to be on the same marquee. It's a free country and everybody is allowed to speak where they want to speak, I just don't want to lend my name to white supremacy. It's the rhetoric of hate, and I don't like it — I will resist it in any way that I possibly can.”

The 56-year-old is happy to be back on TV, saying, “There was some talk of, 'Oh, should he do a TV show?' and I found myself on the set the first few days thinking, 'I'm exactly where I need to be.' This is an idea that needs to happen, needs to come to life."

“Kidding” is described as a comedy, but with an edge. He explained, “Just like real life… Ridiculous, ironic, stupid, hypocritical comedy we're living in — it's absurd, we live in the absurd. I am a featured player in the theater of the absurd.”

As for Mr. Pickles, Jim commented, “In the midst of this horrible lightning bolt of tragedy that happens to these people, he is still a person that wants to be authentic… I think the show will give people that feeling that Mr. Rogers did.”

Watch Jim in “Kidding” when it premieres Sunday on Showtime. 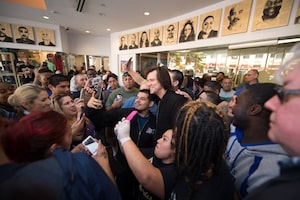 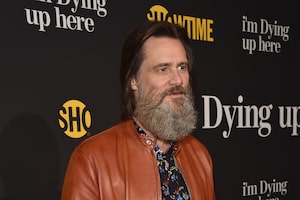 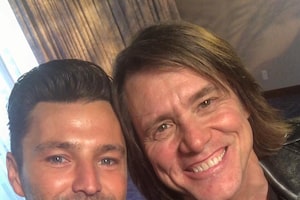