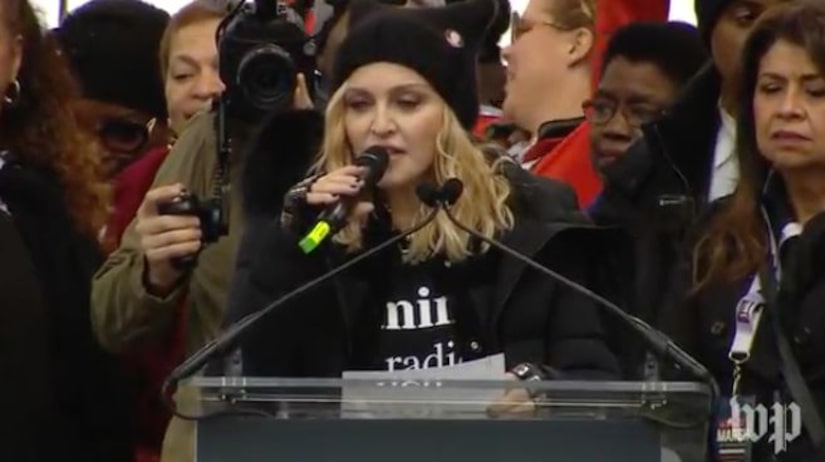 Toward the end of the Women's March on Washington, Madonna took the stage, delivering a defiant, obsenity-laden speech in which she implored progressives to "shake up the world."

In one passage, sure to invite controversy, the pop superstar admitted, “Yes, I'm angry. Yes I am outraged. Yes, I have thought an awful lot about blowing up the White House," before conceding, "But I know this won't change anything. We cannot fall into despair.” She finished her thought by saying she had chosen love, and imploring the crowd to do the same.

She had a blunt message for detractors who have suggested the march won't lead to anything, telling them, "F-ck off. F-ck off."

Listen to a short, clean clip of Madonna's speech!

Madonna addresses Women's March on Washington: Welcome to "our refusal as women to accept this new age of tyranny" https://t.co/MIVYbJqJrQ pic.twitter.com/Ej9G42IFzz

In a surprise, she went on to perform her hit "Express Yourself" and a spirited rendition of her '90s single "Human Nature," which found her leading the crowd in a chant of, "I'm not your bitch! Don't hang your sh-t!"

LEGENDS! 🙌🏼 @cher and @madonna backstage at the #WomensMarch pic.twitter.com/g8x8InMuU8

Images emerged of the singer hanging out with attendees Fran Drescher and fellow musical icon Cher. Cher and Madonna have an up-and-down history together, with Cher attending Madonna's wedding to Sean Penn in 1985, later insulting her in a series of interviews and eventually embracing her as a peer. Cher also addressed the Women's March crowds.

On Sunday, Madonna clarified her comments on the White House, writing on Instagram, "I am not a violent person, I do not promote violence and it's important people hear and understand my speech in its entirety rather than one phrase taken wildly out of context. My speech began with 'I want to start a revolution of love'."