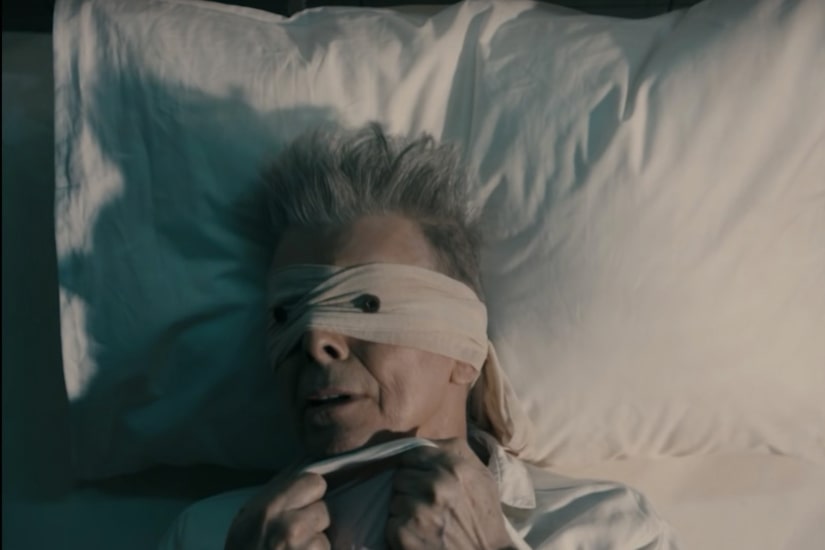 Legendary singer David Bowie passed away yesterday after losing his battle to cancer, but he was already singing about death on his new album, “Blackstar.”

In the music video for the single “Lazarus," which was released just days before Bowie's death, features him mostly lying a hospital bed with gauze covering his eyes. Watch!

In the track, Bowie references his inevitable death, saying, "Look up here, I'm in heaven, I've got scars that can't be seen.” Lazarus of Bethany is a figure in the Bible said to have been raised from the dead by Jesus.

After news broke that Bowie had died, many celebs took to social media to mourn his death, including Madonna, Paul McCartney, Russell Crowe, and many more. Paul wrote on Facebook, "Very sad news to wake up to on this raining morning. David was a great star and I treasure the moments we had together. His music played a very strong part in British musical history and I'm proud to think of the huge influence he has had on people all around the world. I send my deepest sympathies to his family and will always remember the great laughs we had through the years. His star will shine in the sky forever.”

RIP David . I loved your music. I loved you. One of the greatest performance artists to have ever lived. #sorrow

David Bowie was one of my most important inspirations, so fearless, so creative, he gave us magic for a lifetime.

Deeply saddened to hear of David Bowie's passing. What an artist, an inspiration. I'd like to think the lights shone bright for him tonight✨

So sad.. #DavidBowie was & will always be ART that lives on forever.. Fearless & unapologetic.. #RIPDavidBowie pic.twitter.com/iWyrSNl8f0

People always asked me what actor I wanted to work with the most, and I'd always say David Bowie. Sad I'll never get that chance. RIP

He never seemed of this earth. Now he's left it. He bent rules, gender, genres, and our minds. RIP David Bowie. One. Of. A. Kind.

RIP David Bowie :( this was taken last night at my gig.. He was such an icon.. There is no other… https://t.co/vJH2J43FQQ

David Bowie has been my musical north star my entire life. This hurts even more for people close to me. He will NEVER be surpassed, never.

David Bowie, you will be sorely missed. Bowie's “Changes” and the Ziggy story songs were a major influence for me. pic.twitter.com/N1nkD9h82W

You were my all time. You were the greatest. We'll miss you more than you'll ever know. #DavidBowie We're all Aladdin Sane