The new year is already off to a busy start for Taylor Kinney, between his latest film “The Forest,” NBC hit show “Chicago Fire” and upcoming wedding to his fiancée, Lady Gaga.

The actor sat down with “Extra's” Mario Lopez at Universal Studios Hollywood and chatted about Gaga and more.

Kinney, who proposed to Gaga last Valentine's Day, wasn't giving up too many details surrounding the nuptials. He did say the plans are “Going… I think we'll keep it a surprise at this point,” adding, “We've flirted with different ideas, winter, summer, fall, spring.”

The decision will ultimately come down to what Gaga wants, even though he has considered eloping. “You know, I always joked around I'd go to the Little White Chapel… like you say, she's an Italian girl from New York, big family, she's going to want something nice.”

Taylor wants his own big family one day, explaining, “I grew up with a lot of brothers… I've got three brothers!”

Kinney and Gaga are always supportive of one another, and Kinney gushed over the banner year she has had with her Golden Globe and Grammy nominations as well as being named Billboard Woman of the Year. “Incredible. It really was just this past year she's had an amazing year.”

He also dished on “The Forest,” saying, “Take a date, go with your friends, it's a fun scary ride.”

The majority of the movie -- about a journalist who helps a woman find her lost sister -- was filmed in Serbia, even though the story is based on a location in Japan.

“The forest is real. It's based off of a real place. The story is fiction, but it really has a lot of negative connotations just because of the amount of people that take their lives there, lose their lives there, and it gets a bad rap but it really is a beautiful place, but at the same time there's a lot of just ominous scary undertones there and perfect setting to tell a horror film.”

“The Forest” opens in theaters on Jan. 8. 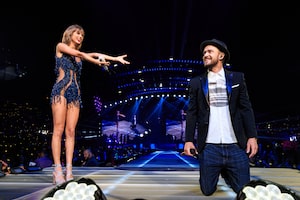 How Justin Timberlake Shocked Taylor Swift on Her ‘1989' Tour 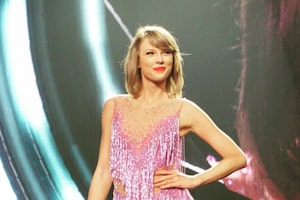