Pia revealed how she felt the moment the crown was taken from Ariadna Gutiérrez Arévalo and given to her. She said, "Of course I was concerned with her... I understand how she feels. If it was other way around I would have felt the same way, but I know that she's very beautiful, she's talented, she has a lot of potential and I'm sure that she'll have other opportunities, a lot of other opportunities.”

After the pageant, Wurtzbach reached out to Ariadna on Twitter. “Yeah, it was her birthday during Christmas Day — that's her birthday. I tweeted her. I wished her Merry Christmas as well, and she replied back to me so yeah, everything's good.”

The new Miss Universe also had the chance to speak with Steve Harvey just after the snafu, “Well, I was able to see him backstage and he apologized to me and I thought that was very kind of him. I accept his apology and I think that speaks a huge… a lot about his character, so I appreciate what he did.”

Despite his mistake, Steve has signed on to host the pageant again next year. Pia is thrilled with the news, saying, "I can't wait to see him again. I definitely want to let him know that he's welcome to visit the Philippines any time he wants. Maybe I'll take him around myself, and I'm excited to see him back for Miss Universe — I think he's a breath of fresh air. He's just what we need. The girls, we feel relaxed when he's around cracking jokes, and then it makes our personalities come out more, and that's also beneficial to the judges and as well as the audience, people who are watching.”

Ultimately, the 26-year-old is proud to have brought the Miss Universe crown back to her native Philippines. “Of course I want to win for my country— it's been 42 years since the Philippines won in Miss Universe, so it's a big deal back where I'm from and now we finally got it, so I'm very excited about it.”

Although there is a lot of attention on the pageant controversy, Pia is taking it all in stride. She shared, “Well, right now I think it's a good thing because I will be able to reach out to more people when it comes to the platforms and the causes that I believe in. Since we got more attention, then use that attention to have more reach.” 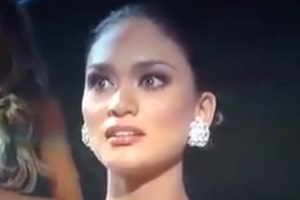 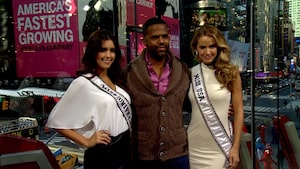 Does Miss Universe Have Marriage on Her Mind?