Bobbi Kristina Brown's longtime boyfriend Nick Gordon was incoherent and falling down at his hotel just hours before his sit down interview-turned-intervention with Dr. Phil.

The Daily Mail caught Nick on video at the Ritz Carlton in Buckhead, Atlanta. He's on his knees, talking nonsense, and being helped along by multiple people.

Twelve hours later, he met with Dr. Phil with his mother Michelle by his side.

In one promo clip, Dr. Phil tells Michelle, “Your son, left to his own devices, will be dead inside a week.”

In another sneak peek, Nick agrees that he needs to go to rehab, as Dr. Phil tells him, “You can't help Bobbi Kristina the way you are.”

Gordon bristles, however, when the psychiatrist tells him he needs to “man up.”

“I've been so strong for so many people for so long,” Nick said. “So please don't tell me to man up.”

That doesn't stop Dr. Phil, who replies, “I am going to tell you to man up… I just did.”

The video clips also reveal how torn up Nick is over Bobbi Kristina and her mom Whitney Houston. At one point he sobs, “I miss Krissy and Whitney [Houston] so much. I want them back,” before declaring, “I hate Bobby Brown.”

People magazine reports that Nick did enter rehab after his meeting with Dr. Phil, which airs on March 11.

Bobbi Kristina has been in a medically induced coma since Jan. 31. 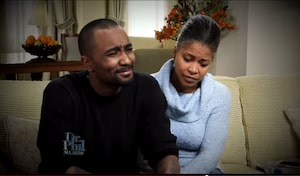 Video: Nick Gordon Breaks Down on 'Dr. Phil,' Before Storming Off