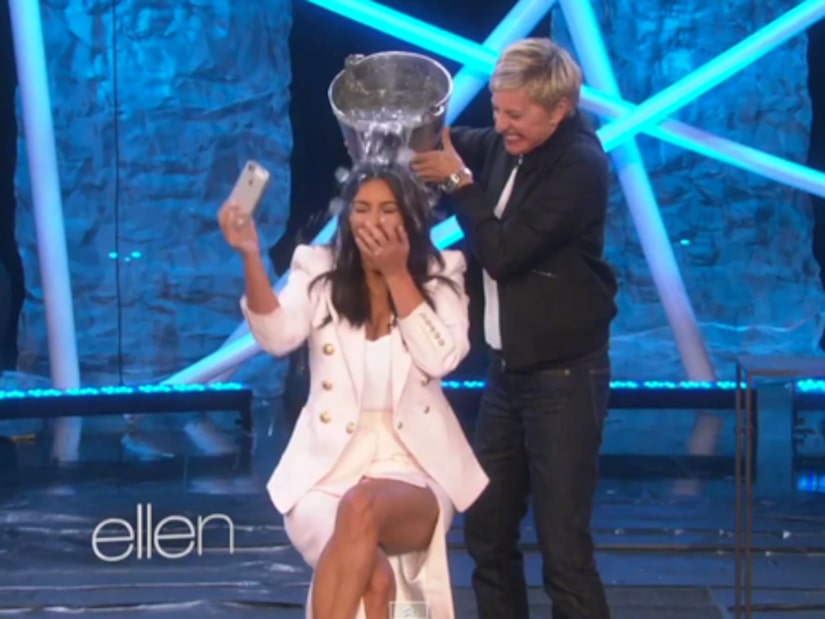 Not only did Kim Kardashian take the ALS Ice Bucket Challenge, she did it in front of a live studio audience on the “Ellen” show!

As host Ellen DeGeneres poured the ice water over Kim's head, the reality star snapped a selfie with her phone. Watch!

We still haven't seen Kim's pic, but she did share a funny gif of herself taking the challenge. Check it out and visit ALSA.org to donate!

Kardashian also opened up about having more kids with hubby Kanye West, revealing that she wants at least two if not more.

“I just went to San Diego and to give my pregnant sister a break,” she explained. “I took care of my niece, nephew and my daughter. To bathe them, all three, feed them, get them in the pajamas and down for bed I was literally, like crying. It was so hard. Three kids. I don't know how my mom did it with six. So it was really, really hard, so I'll go for two but then again I have so many siblings and I love it. They're my best friends. I would want that for my kids. So I'm going to do two and see how it is."

Tune in on Tuesday for more of Ellen's interview with Kim! Visit EllenTV.com to find out when it's on, and watch Day 2 of Ellen's mega Season 12 premiere!