Comedy great Joan Rivers is in stable condition at a NYC hospital, after she apparently stopped breathing while undergoing a procedure on her vocal chords. 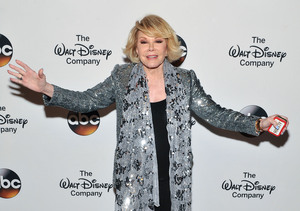 Getty
The news of Rivers’ health scare sent many celebs to their Twitter accounts to send well wishes to the funnylady:

@Joan_Rivers Joan, you have to live. Harry Belafonte is getting an Honorary Oscar.

sending so much love and healing energy to @Joan_Rivers !!! no one is ready to go on without you lady!!!

Joan upgraded to stable. Come on @Joan_Rivers! You've got a full calendar next month!

sending love to joan rivers! come one joan! you can get better! you can do this!

Sending all my love and prayers to my friend @Joan_Rivers right now.

E! also released a statement, "E!, Fashion Police and NBCUniversal continue to send thoughts and prayers to Joan, Melissa and their entire family."

Ashley Tisdale and Christopher French Are Married! See Her Wedding… 8