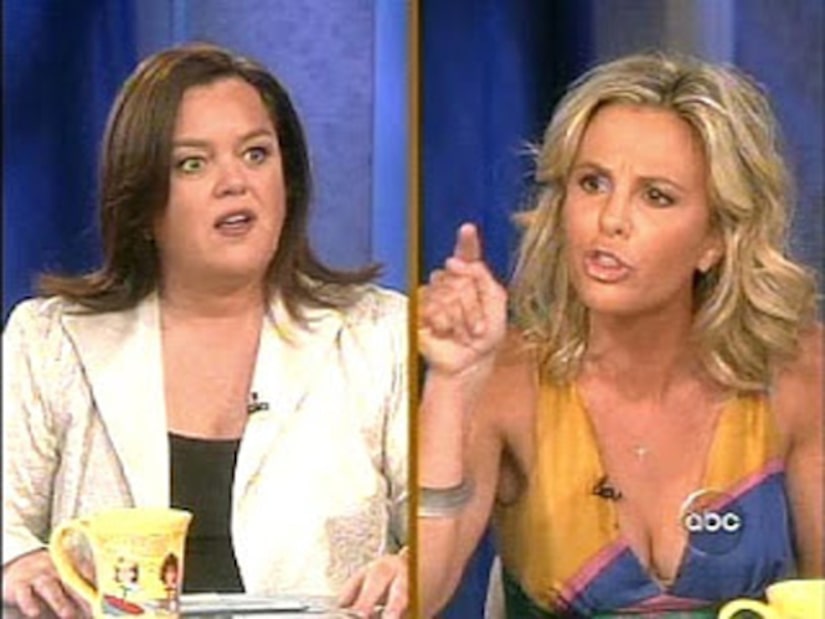 Elisabeth Hasselbeck has Rosie O'Donnell and “The View” on her mind. (Scroll down to find out what Donald Trump had to say about Rosie.)

In a new Instagram message, Hasselbeck says that when she blasted the comedian on “FOX & Friends” this week (read her comments here), she was simply providing her analysis of Rosie's return to the show.

She reiterates that she did the same when she commented on Barbara Walters' retirement, and when Jenny McCarthy and Sherri Shepherd announced they were leaving.

She promises to provide a similar analysis when the “next two chairs are filled” in the coming weeks or months.

Hasselbeck assured fans that she doesn't hate the comedian.

"I don't hate Rosie. I actually called to talk to her 7 years ago. She did not want to speak to me. I am happy to have a #momversation about why I would never defend her 2007 comments below."

Are These Men Joining 'The View'?

Hasselbeck is referring to an epic fight on the set of “The View” when she and Rosie were both co-hosts in 2007.

She quoted O'Donnell as saying, “I just want to say something: 655,000 Iraqi civilians are dead. Who are the terrorists?... If you were in Iraq, and another country, the United States, the richest in the world, invaded your country and killed 655,000 of your citizens, what would you call us?”

After Elisabeth's call into “FOX & Friends,” former “View” co-host Joy Behar blasted the conservative mom, saying, “I think it's a hate-filled remark. And she should explain it."

Meanwhile, Donald Trump also lashed out at the Rosie, telling New York Daily News' Confidenti@l, “I think it's a good move on ABC's part. It'll have a short term positive effect. The show has really missed not having Barbara on it. With that said, it'll have a short term positive impact, but then you have the long term. Rosie always self-destructs.”

He continued, “I think she's got a great agent -- anyone with so many failures that can go back again and again is amazing to me,” he told us. “It's very sad after the catastrophe that took place when she quit after she was mentally beaten up by Elisabeth. Her show on OWN was a catastrophe, Barbara hates her.”

Trump would still consider being a guest on the show, despite having Rosie on the panel. “It would be the hottest show of the week. I'm the first one they'll think of,” he said.