Miley Cyrus seemingly didn’t want to stop partying in Las Vegas on Friday… and included rumored boyfriend Kellan Lutz in on the fun.

The 21-year-old was first spotted dancing her butt off at Britney Spears’ “Piece of Me” show at Planet Hollywood. Then, Miley headed over to host the opening of Beacher’s Madhouse at the MGM, where she met up with the “Twilight” hunk and stole the show.

The “Wrecking Ball” singer was also smooching with other guys, too, so it wasn’t just about Kellan (see some pics here). 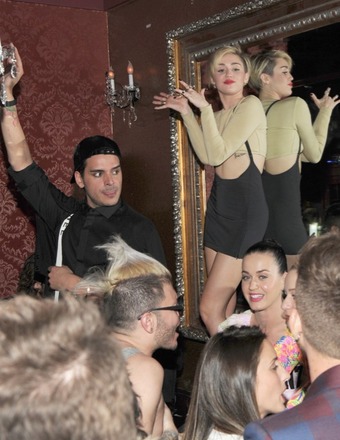 The romance rumors began earlier this month after the two were photographed walking off the same private jet, separately, after returning to Miami from a Bahama excursion.

A source told UsWeekly.com that Lutz, who is a good friend of Miley’s ex Liam Hemsworth, is "nice eye candy" for Cyrus. "They really enjoy each other's company."

The “Bangerz” pop star recently released yet another sexually explicit music video for her single “Adore” and will perform live at Times Square on New Year’s Eve, right before the ball drops.

Lutz will be seen next in “The Legend of Hercules,” opening in theaters January 10.