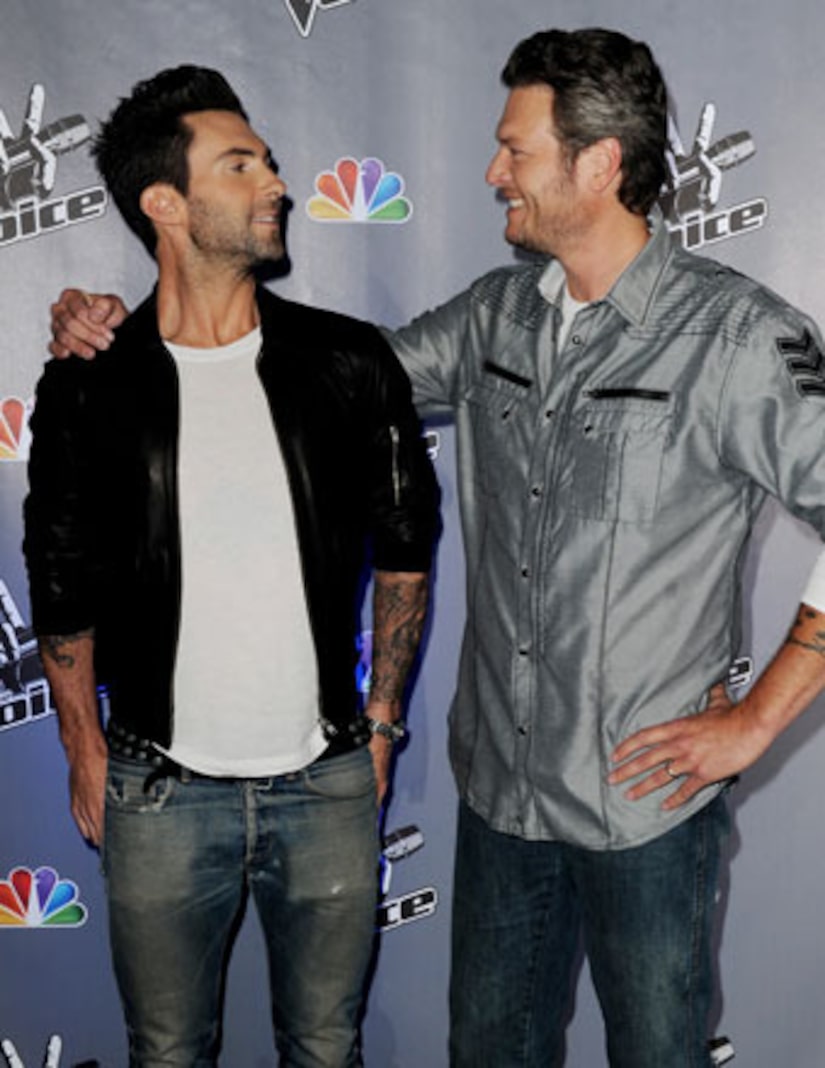 Blake Shelton and Adam Levine have been besties since Season 1 of “The Voice,” but it seems there is a new bromance brewing on the set.

Midway through a night of heartfelt dedications and power vocals by the top 12, Blake was gushing over his team member Ray Boudreaux, telling the crowd, “Ray is sexy and you can't blame him for that!”

Christina definitely noticed, commenting, “Blake has quite the crush… Blake was getting his panties in a bunch!”

Read on for more of the exchange and a breakdown of our favorite performances of the night!

Girl on Fire: Jacquie Lee, the pint-sized-powerhouse from Christina Aguilera's team showed fans her darker side with Jack White's “Great Gatsby” favorite “Love Is Blindness.” Mentor Xtina called her a “force of nature” with “soul beyond her years,” while Adam gushed, “this crazy voice comes out of you like a dragon.”

Jacquie revealed, “I thought taking a cool twist on the song, for a 16-year-old girl to do a Jack White version of a U2 song was sort of surprising and that's what I wanted to go for.”

Dreamiest Rendition: Caroline Pennell, the wide-eyed teen from CeeLo Green's group, kicked off the show with Avicii's “Wake Me Up.” Her coach called it “wonderful,” while Adam summed it up, “There is a purity to what you do that is just amazing.”

Pennell described her strategy, saying, “Something I've been trying to work on is not having these big moments, but incorporating little ones so it will feel the same, but feel different.”

Swoon-Worthy Performance: It wasn't just the female fans that went wild for Ray Boudreaux's performance of John Legend's “All of Me,” Blake did too! He gushed over his singer, “I got wrapped up in that… but Ray is sexy and you can't blame him for that,” leading Christina to comment, “Blake has quite the crush… Blake was getting his panties in a bunch!”

Is there a bromance brewing between Ray and Blake? “It looks like it,” Ray told us with a laugh. “He's a great guy. Any support he shows I'm definitely on board with.”

Jaw-Dropping Vocals: Matthew Schuler's rendition of Jeff Buckley's “Hallelujah” moved the room. His own parents were in tears! Coach Christina told her indie rocker, “I am very humbled and happy you chose me as your coach.” Adam admitted the odds were stacked against him, because of the song's legacy, but the college sophomore did a “beautiful” job.

Matthew said he was “blessed” to sing such a beloved song, “There is so much in those lyrics, those lyrics mean so much to so many people, so going into the song I had to connect with that first and foremost… you don't want to over sing it or over perform it, you want to stay true to the song.”

Rock Star Moment: As always, Kat Robichaud brought 110 percent “Katitude” with a moody cover of “Sail” Awolnation. Her mentor, CeeLo pointed out that “pain is a common denominator… but music can be healing” Blake was shocked she could sing and crowd surf at the same time and Christina loved “the darkness.”

CeeLo came up with “Katitude,” but in Robichaud's mind it means, “someone who has wild abandon, accepts who they are, they are just going to bring it no matter what they look like, how old they are, what sex they are or what their status in life is, just owning and loving it and being the best you that you can be.”

Heart-Felt Dedication: Tessanne Chin dedicated Emeli Sande's “My Knd of Love” to her husband in the audience. Christina called it “beautiful” and “sweet,” while her coach Adam declared her voice Grammy worthy and on par with Whitney Houston.

Chin, who is a big fan of the song, explained, “I wanted to do this song justice and I wanted to bring the audience into my world and how I felt toward my husband.” She added that the performance “carried more weight because she wanted to share something special with him.”