Pregnant actress Kristen Bell was glowing on Feb. 26 as she was caught on camera rolling up her T-shirt to show off her ever-growing baby bump.

Check out the photo at Us Weekly! 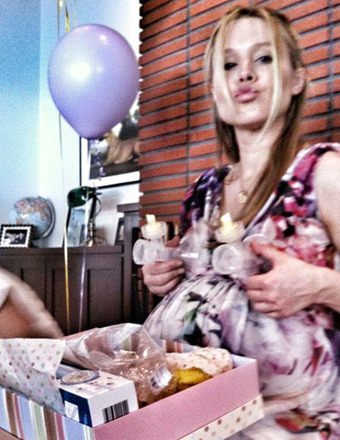 "All my best girlfriends came to my baby shower," she tweeted Feb. 23, alongside a photo of herself with Ben and Josh. Writer Kelly Oxford even posted a silly pic of Kristen posing with breast pumps.

The 32-year-old “Veronica Mars” alum, who is expecting her first child with “Parenthood” star Dax Shepard, recently joked with Ellen DeGeneres about her labor day jitters.

"I feel like, when I arrive at the hospital, I want a glass of whiskey, I want the epidural in my back, and I want to get hit in the face with a baseball bat," she said. "Wake me up when it's over, because I've seen the videos -- and it looks terrifying."