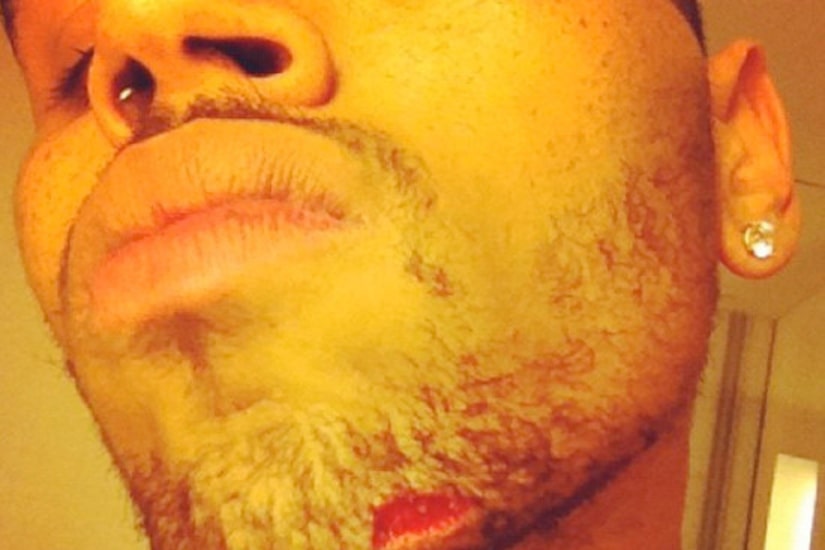 Singer Chris Brown took a bottle to the chin on Wednesday night after an alleged run in with Drake and his entourage.

Brown tweeted a photo of the nasty gash to his face with the message, "How u party wit rich n**** that hate? Lol... Throwing bottles like girls? #shameonya!." He later removed the post.

The NYPD, who received a call about the melee between 4 a.m. and 5 a.m., confirmed to TMZ that the two entourages got into a brawl at W.i.P nightclub. Chris and Drake were not on the scene when police arrived and no arrests were made. Five people were injured, none critical.

If The Sun has the story straight; the fight was over Chris' ex-girlfriend Rihanna, who is supposedly now dating Drake. The paper has unconfirmed reports that Brown sent Drake a bottle of champagne as a peace offering, but Drake returned the bottle along a rather insulting note.

Sources tell the paper that Chris got angry and confronted the other singer who threw a punch. Before Brown could retaliate, Drake's friend hit him with a bottle.

UPDATE: Drake's rep is calling the story bogus, telling TMZ, "Drake did not participate in any wrongdoing of any kind last night at W.i.P. He was on his way out of the club when the altercation began. [Drake] did not engage in any activity which resulted in injury to person or damage to property.”

TMZ's sources tell a different story. Chris never sent a bottle to Drake's table, an insider said. The two rappers were both seen hanging out in the VIP section when Drake started pointing and yelling at Chris. Both entourages came to their aid and someone threw a bottle, escalating the brawl.

The club sustained extensive damage, including broken tables, mirrors and lighting. The Associated Press confirmed that five people were injured with cuts and three were hospitalized. Police are investigating, but so far no arrests have been made nor complaints filed.