A healthier-looking Michael Douglas talked about his cancer treatment and the long recovery road ahead, crediting his family for getting him through the chemotherapy "hellhole."

"Cancer has shown me what family is. It showed me a love that I never knew really existed," the Oscar-winning actor told The Hollywood Reporter in his first major interview since announcing he had Stage 4 throat cancer. "I've been overwhelmed by the outpouring of love and support." 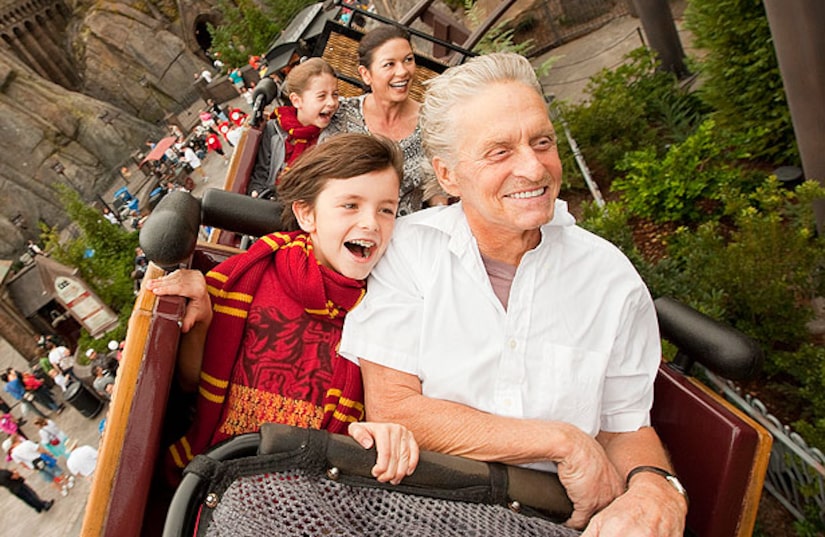 Douglas also talked about having a very bad year, including seeing his son, Cameron, sent to prison on a drug conviction, and being sued by his ex-wife, Diandra, who demanded 50 percent of his earnings from Douglas' sequel, "Wall Street: Money Never Sleeps."

"After all the adversity I've had this year," Michael explained, "with my health and my son's incarceration, my ex-wife and the lawsuit -- to be able to sit here, I'm so happy."

"He's an extremely strong person," added wife Catherine Zeta-Jones. "I love that strength of character, coupled with the reality that he's sensitive. He's humble. He doesn't take himself too seriously. But predominantly, he's a very strong man. This has really helped through these last months. He has never lost that strength."

Douglas was well enough to accompany Zeta-Jones and their two children, Dylan, 10, and Carys, 7, to Orlando's Disney World over Thanksgiving weekend, and the actor is also looking forward to his next film project, playing Liberace in the Steven Soderbergh biopic.

"I've got a bunch of tapes of performances," Douglas said. "I'm thinking... I'm a blank slate. Everything shows me he was a lovely man; I just want to reconfirm that."