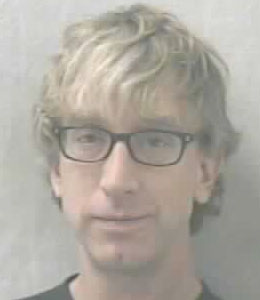 Dick was arrested in West Virginia early Saturday morning on two counts of sexual abuse in the first degree.

He is currently in custody at the Western Regional Jail. He is due to be arraigned Saturday.

TMZ.com reports a press release from the Huntington Police Department says: "Based upon statements of two victims and independent witness accounts alleging that he had engaged in unwanted and uninvited groping of the two victims' genital areas, Andrew R. Dick (AKA Andy Dick) of South Pasadena, Calif., was arrested and charged with two counts of Sex Abuse in the First Degree."

The criminal complaint says Dick was talking with a male when he "unexpectedly and without invitation grabbed the victim's crotch, repeatedly groping then kissing him."

Dick is in West Virginia to headline a special engagement at the Funny Bone Comedy Club in Huntington Jan. 22 - 24.

This is not Dick's first run-in with the law. In 1999, Dick drove his car into a utility pole in Hollywood. He was charged with possession of cocaine, marijuana, drug paraphernalia, and driving under the influence of alcohol/drugs and hit-and-run driving.

Nine years later in 2008, Dick was arrested in Murrieta, Calif. on suspicion of drug possession and sexual battery.

Busta Rhymes Shows Off His Weight-Loss Transformation — See His… 7