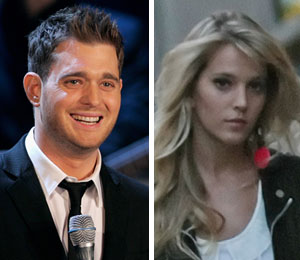 "Michael proposed to his girlfriend, Luisana, in November, in front of her family in Argentina," Bublé's rep tells People magazine. "They're ecstatic. They're adorable, in love and laugh all day long."

Bublé, 34, proposed to Lopilato, 22, with a diamond ring from Vancouver jeweler Minichiello. No wedding date has been set.

The couple met in Nov. 2008 at a party after his concert in Buenos Aires.

Bublé was previously engaged to his longtime girlfriend, singer and actress Debbie Timuss, but the two split in 2005. He also dated "The Young Victoria" actress Emily Blunt for more than two years. They called it quits in 2008.