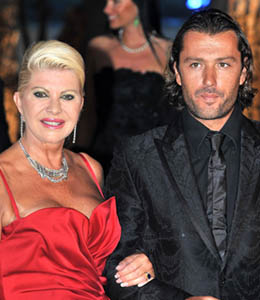 Ivana Trump is getting divorced for the fourth time.

Trump, 60, filed for divorce from entrepreneur Rossano Rubicondi, 36, on Friday. The socialite filed a legal separation agreement back in 2008.

See photos of celebs who called it quits this year

The couple tied the knot in April 2008 in a lavish ceremony at Mar-a-Lago, the Palm Beach, Fla. estate of ex Donald Trump.

She says in a statement that Rossano has mainly worked and lived in Italy for the last two years, while she's busy with hotel and resort development projects around the globe. She says the two have struggled to find time to get together.