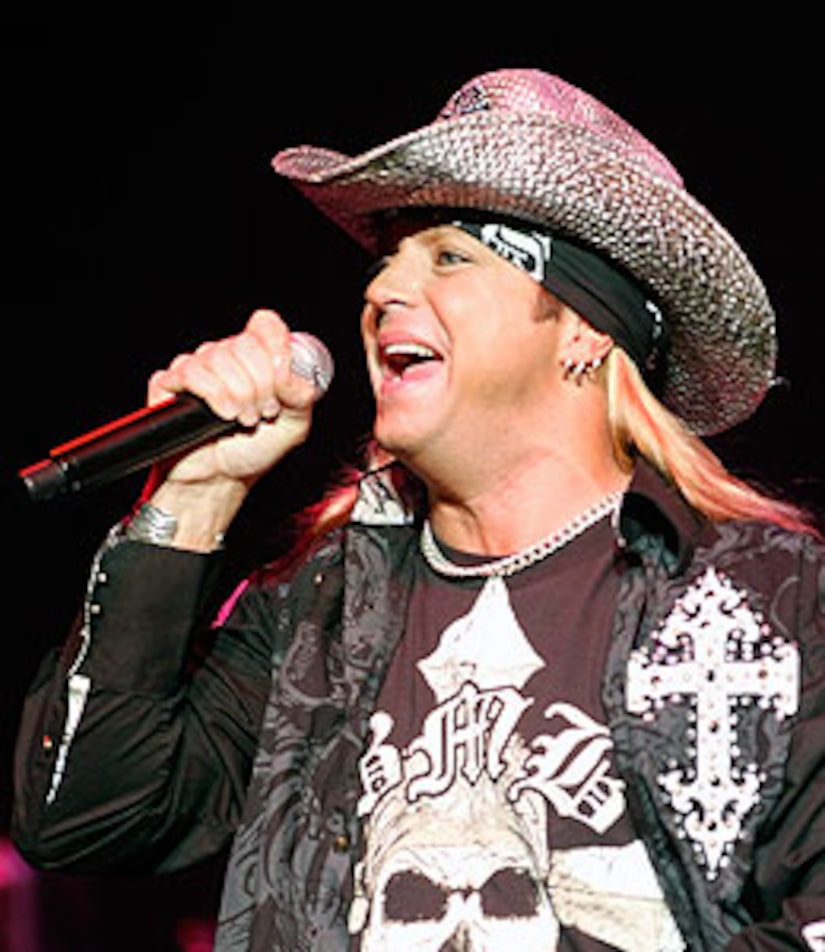 Reps for Bret Michaels have taken issue with how his run-in with the scenery at the Tony Awards was handled by the show's spokespeople.

The Poison singer's rep, Janna Elias, has issued a statement regarding the incident at the awards show, where Bret was smacked on the head with a piece of scenery and suffered a busted lip and fractured nose. The "Rock of Love" star then reportedly rolled out of the way so the scenery didn't squash him. Read the statement.

"With all due respect to everyone working the Tony awards, somewhere down the line there was a lack of communication and the prop should have been immediately halted until Michaels was clear. Sunday morning at rehearsals, Bret was never informed that the descending set piece existed let alone would be moving into position as he was exiting the stage. Although Bret was visibly dazed he remained extremely calm backstage as members of our road crew brought him a towel to wipe the blood from his face. His only comment at the time was 'What the hell just hit me?' The severity of this injury is not being taken lightly as symptoms from head and neck injuries at first may seem like nothing and sometimes do not present for days. At his time the full extent of his injuries remain to be seen until all x-rays are back. "

"I find it surprising that a Tony spokesperson would brush off this incident with a comment stating 'Mr. Michaels missed his mark' with no mention of concern for his condition. If everyone at the Tonys were aware that Bret missed his mark then they should have been aware enough to stop the set piece from hitting him or at least slowed it down until he cleared the stage. I feel had this incident happened to Liza Minneli, Dolly Parton or Elton John, the Tonys would have at least issued a letter of concern. Bret has performed live, with Poison or solo, for over 20 years and on a daily basis is around pyro, lasers and a moving light show. He understands that there is always an element of risk in any live performance but Bret entrusts his safety to the crew whose job it is to make sure the show goes off without a hitch and should any member of the band be in harm's way that they do not complete the gag. However, in this situation Bret was not on his stage but was at the mercy of the Tonys. He was performing on the Tonys' stage and had the reasonable expectation that that safety of the artist was a priority and at no time did he do anything over the top or outlandish that would have put himself or others in a dangerous situation...You mean to tell us that with all the technology, producers, directors, stage managers and crew that no one at the Tonys saw Mr. Michaels clearly backing up and turning to exit the stage or was capable of halting the prop or slowing it so it didn't strike Bret? There was no official mark, Bret did what he was instructed to do which was to finish the song and return to the retractable stage platform, which was exactly what he was doing when the prop struck his head."

Bob Wallerstein, another representative for Michaels, added, "We realize the show is live and must go on, however, it is unfortunate that the show's host made light of the situation without having any knowledge of the severity of Bret's injuries. Comments that Mr. Harris was doing shots backstage with Mr. Michaels and that Bret was completely fine were untrue considering Bret never saw Mr. Harris prior to, during, or after the Tonys, but in fact was being attended to by medical personnel backstage. Michaels did not return to the stage, the seats nor attend any after parties.

An official statement on this incident is expected by Michaels by the end of the week."