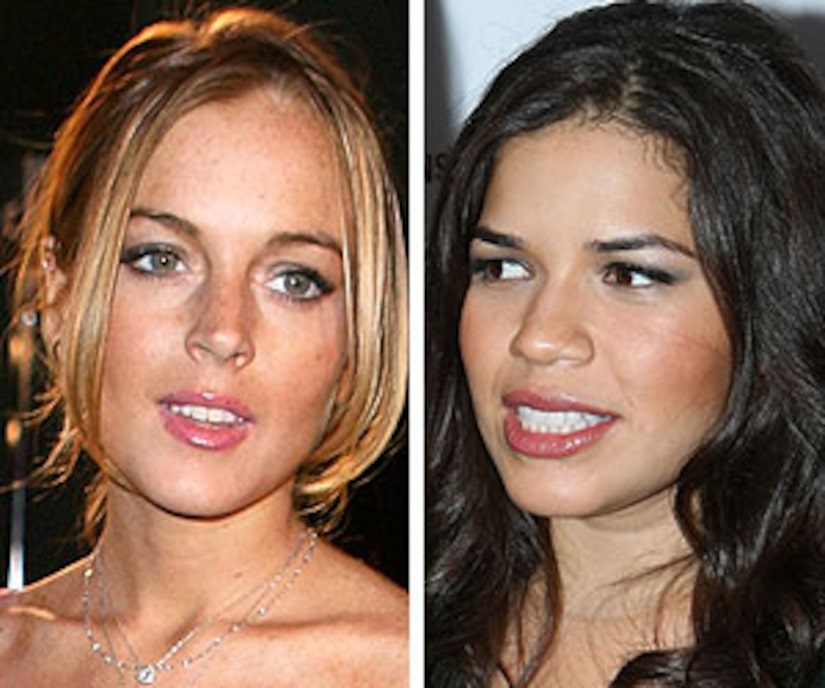 Lindsay Lohan originally signed on to film six episodes of "Ugly Betty" -- but that number has now been reduced to four, prompting whispers of a feud between LiLo and the show's star, America Ferrera.

According to Page Six, set sources claim Lohan was a nightmare. "Lindsay would show up every day with an entourage of people. She smoked 24/7, and after she left, they had to repaint her dressing room it was such a mess."

A Lindsay pal dismissed that report, blasting accusations that Lohan is messy and constantly bringing a posse to set. The friend blames Ferrera for the tension on "Ugly Betty," saying, "America was mean to Lindsay. Producers give her too much power. Lindsay didn't do the last two episodes because America didn't like her and got her kicked off."

America's rep told the Post, "America is grateful to have had her on the show and thinks everyone should tune in to see how great the episodes are." A rep for the "Mean Girls" actress said, "Lindsay was scheduled for six episodes and is appearing in four but had a lovely time."

UPDATE: Producers of "Ugly Betty" issued this statement to "Extra": "Lindsay wrapped up her arc and she's done filming. She did a great job and we enjoyed having her. Viewers can look forward to her episodes tonight and next week."