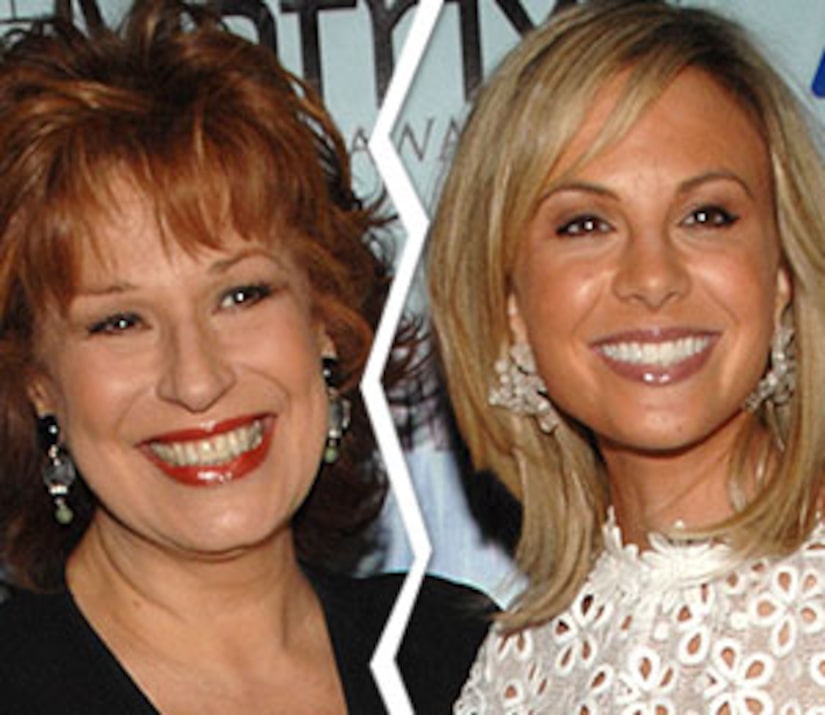 After months of on-air explosions, celeb gossip site Defamer.com reports the drama has moved backstage, reporting that after yesterday's show, Joy got into Elisabeth's face, yelling, "Shut the f--- up," and "I will burn you down!" This alleged war of words came minutes after conservative radio host Bill O'Reilly took a jab at liberal Behar, saying, "You're name is Joy -- you should be joyful."

Today, both women displayed a show of solidarity by walking out arm-in-arm, insisting the outrageous claims are completely wrong. "I resent it when they misquote, or make up lies," Behar stated. "I don't like it!" The former "Survivor" chimed in, "The fact that those articles can carry such life based on lies... it's awful."

Fellow hostess Whoopi Goldberg echoed denials of a "View" battle on "Good Morning America" today, insisting the heated discussions don't inspire bad blood. "There are no feuds, there is no rancor," said Goldberg. "It's just a bunch of broads disagreeing about stuff."

There is an upside to the rumors -- after a dramatic drop, ratings are up. Barbara Walters insists that despite fundamentally different beliefs, the "View" crew is sticking together. "It's just been a very successful year... it's like sitting down at your dinner table, and then when it's done I hope you feel that you've had a very good meal."

Sticking together yes, but don't expect them to tone down their commentary. On today's show, Joy delivered a zinger after Elisabeth announced she'll hit the campaign trail with Sarah Palin. "Take some pictures," stated Behar. "I want to see her wardrobe."