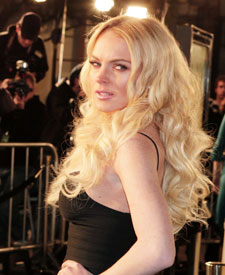 Lindsay Lohan is attached at the hip to BFF and rumored love interest Samantha Ronson, and no one can tear them apart -- no one, it seems, other than Lohan's father, Michael. According to the NY Post, papa Lohan waited at the Peninsula Hotel for his daughter to show up to support Ronson, who was deejaying a party there.

"Michael found out where Lindsay was going to be and went to find her, she was really freaked out by it because she has no interest in seeing her father," said a source.

The "Mean Girls" star reportedly checked into the hotel with Sam on Tuesday, but split by Wednesday, after learning her father was on the way. "Michael was staking out the lobby and waiting for Lindsay to make an appearance," said the source, "It was freaky. He was sitting on the steps and texting like mad, and looking very upset that she hadn't arrived."