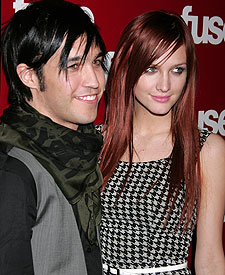 Rocker Pete Wentz has been married only a few days, but he's already happy in his life as a newlywed with wife Ashlee Simpson. In his first interview since the "I dos," the 28-year-old opened up to Ryan Seacrest on his morning radio show. Pete, the bassist and primary lyricist for Fall Out Boy, divulged that he and Simpson sealed their vows with a kiss -- only after taking care of the assets! "We have signed a pre-nup," said Wentz.

The happy couple also decided to forego a honeymoon -- for now -- to eat, tan and hang out in their Los Angeles basement! "We've got some blow-up palm trees, a little fake-n-bake tanning booth," said Wentz. "We're eating DiGiorno's pizza and getting in that tanning oven every once in awhile -- it's great."

Although Wentz was happy to give out information on his married life, he kept mum about rumors that Ashlee has a bun in the oven. When Seacrest asked about baby names, Pete said, "This baby has not been confirmed."

Pete also refused to give details about sister-in-law Jessica's relationship with Tony Romo, saying, "I don't know anything about what's going on with them -- I'm so busy clearing up my own rumors!"

Jana Kramer & Mike Caussin on Auditioning for 'RHOBH,' and…