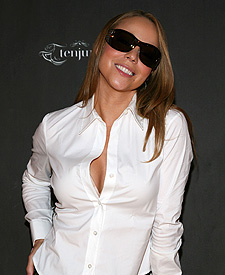 The pictures from People magazine are finally proof for all of those "I do" rumors - showing Mimi in a Nile Cmylo wedding dress and Louboutin heels on a beach in the Bahamas -- celebrating with her new groom, Nick Cannon!

The very same day Nick proposed, Mariah's longtime friend and "Extra" correspondent A.J. Calloway asked the diva about all the rumors -- and Mimi played coy. When asked about her man, she joked to Calloway, "I was talking about you, as always. Aren't we having an affair?"

Mr. and Mrs. Cannon opened up to People magazine this week, sharing photos from their very private ceremony and dishing on their new married life. "We really do feel we are soulmates," said Carey, "I never felt a love like this was in the cards for me.