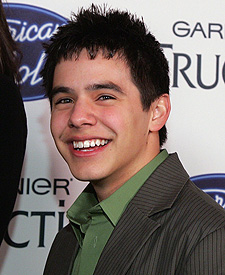 He may be one one of Simon Cowell's favorites to win it all, but does big-voiced David Archuleta have an overbearing dad? The New York Post claims Jeff Archuleta calls the shots -- and was accused of intimidating rivals on "Junior Star Search."

Ryan Seacrest is denying that 17-year-old David has the stage dad from hell, insisting his pop is just there for junior. "He's always been fantastic," Ryan says of the doting dad. "He's clearly there because David is young and in school, so he's got to have someone there with him. But his dad's been sweet. Very nice."