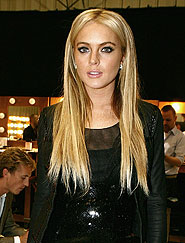 Lindsay Lohan's ex-BF, Calum Best, is denying the former couple is at the center of a new sex tape scandal.

A grainy picture -- purported to be a screen grab from a steamy home video of the reformed bad girl -- made the Web rounds this week, and reports quickly surfaced that Best was behind it. "It is definitely not Calum," his spokesman told U.K.'s The Sun.

Lindsay and Calum dated briefly in 2007.