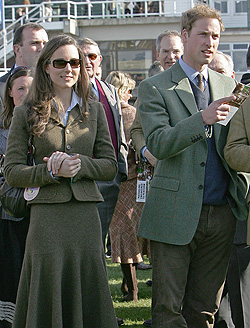 Prince William and his on again/off again girlfriend, Kate Middleton, have hit the slopes of the same Swiss resort where they first stepped out as a couple -- and rumors are swirling that the two are on again -- for good.

The two were snapped stealing kisses and giggling in the snow, sending British tabloids into a frenzy about the future King of England and his possible princess. Now there is speculation that Kate, 26, and Wills, 25, have made it official. British author Robert Jobson told CBS, "I believe, by going to Klosters, as they did in 2003, when the relationship became public, is making a statement, whether intentionally or not, and the statement is that, 'I'm with Kate Middleton. She is the woman I love. And she may be my future princess.'"

William is currently gearing up for deployment with the Royal Navy. Kate, who recently quit her job as an accessories buyer at an English fashion chain, is reportedly exploring her interest in photography.