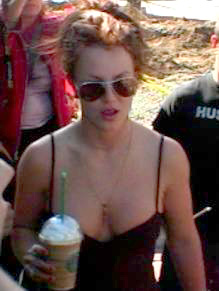 Britney Spears was reunited with her baby boys this weekend after her visitation rights were reinstated, and what did she do to celebrate?

She went to Starbucks!

The pop princess drove Sean Preston, 2, and Jayden James, 1, to her favorite coffee shop on Saturday, then reportedly spent a quiet night with the boys at her Malibu home.

The next day Malibu was engulfed in flames, but Britney reportedly told photographers she wasn’t worried because it wasn’t near her house.

Brit, 25, was granted visitation rights this weekend after complying with a court order. Though the judge didn’t specify exactly what Britney did to lose the kids for the second time, it’s widely believed she didn’t answer her phone for a court-related scheduling. She reportedly blamed the mishap on bad reception at her Malibu home.

On Friday, Kevin Federline’s attorney Mark Vincent Kaplan told “Extra” he expected Britney’s visitation rights to be “reinstated fairly soon, probably before the next court date,” which is scheduled for Oct. 26. On that date, Kaplan says the court will hear various evaluations on the custody situation, and the judge “may or may not make new orders.”

He added that both Britney and Kevin are hoping their custody ordeal moves as quickly as possible, but that Kevin “wants Mom to be involved in their lives.”