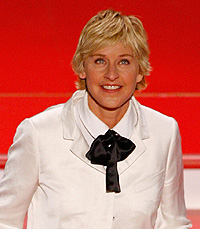 Ellen DeGeneres’ week has gone to the dogs, and it just keeps getting worse.

Yesterday, Ellen made a tearful plea on her show for an animal shelter to return the dog they confiscated after Ellen adopted it but gave it to a friend when the pup became too much to handle.

The shelter owner is now claiming that she’s received death threats and is afraid for her safety!

Still, a lawyer for the owner says there are no plans to return the dog, and that the shelter won’t be “bullied around by the Ellen DeGenereses of the world.”

The adorable pup, named Iggy, was adopted from the Pasadena-based Mutts and Moms animal shelter. But Ellen gave it to her hairdresser’s young daughters.

The shelter soon stepped in and took the dog back, saying that Ellen had violated a legal agreement that if she couldn’t keep the pup she’d hand it back to the shelter. In addition, the shelter says it can’t give puppies to families with kids younger than 14.

Yesterday, Ellen sobbed as she said, “I'm begging them to give that dog back to that family. I just want the family to have their dog. It's not their fault. It's my fault.”

Today, her publicist said, “She was wrong by not reading the agreement. She thought she was doing a good thing.”

As for the death threats, the publicist added, “It's very upsetting to hear that someone is getting those kind of calls. Ellen just wants the dog reunited with the family."

However, "Extra" has learned that Iggy was placed in a new home today.

What do you think of the controversy? Go to Ellen's page on the Extra Wiki and sound off!