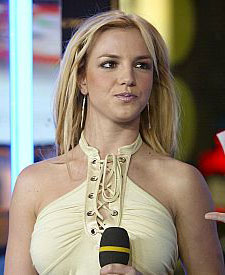 Britney Spears has reunited with her two little boys, reportedly under the supervision of a court-ordered parenting coach.

Sean Preston and Jayden James were dropped off at Britney’s Malibu home yesterday, where they stayed until the afternoon. Kevin Federline’s bodyguards then picked up the tots and took them back to his San Fernando Valley home. Britney gave her boys a tearful goodbye as mom Lynne watched.

Soon after Britney said goodbye to her babies, she drove to Santa Monica to shop for a cell phone. Surrounded by her usual pack of paparazzi, Britney struggled to navigate through the crowd and eventually had to call a police escort!

But the troubled starlet made it to her car and eventually to a gas station, where she had the paparazzi fill the tank as she sat in her car – and smoked a cigarette.

Today there is a bizarre new report that Britney has applied for a job – as a bartender!

But "Extra" looked into this rumor and can confirm it is NOT true.

Meanwhile, Britney’s record label is standing by her despite her strange behavior and custody ordeal.

A spokesperson for Jive Records says, “It’s not Jive’s place to fashion a public relations campaign with respect to Britney’s personal issues, but Jive does care about her and does support her…Britney’s a grown woman, and she makes her own choices, and we respect that. But she’s been at a disadvantage without a consistent team and obviously that makes it harder to cope.”