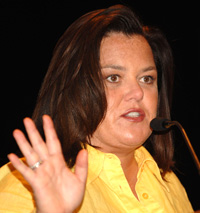 Rosie O’Donnell’s book “Celebrity Detox” has hit shelves, and she’s not holding back about how she really feels about her fellow celebrities.

She writes she felt like an outsider on “The View,” saying she considered herself “hugely threatening.”

She says Elisabeth Hasselbeck “continued to appall me with her almost glib comments about torture…but the feeling of baseline love stayed.” Rosie left the show after a heated on-air fight with Elisabeth about the Iraq War, when she argued that Elisabeth wouldn’t “defend” her against negative publicity.

It’s a similar sentiment in her dealings with Barbara Walters.

Rosie feels that her co-host betrayed her during her infamous fights with Donald Trump.

She writes that she told Barbara, “You did not defend me…don’t let the bad man hurt me.”

Though she writes that she and Barbara eventually found a way to love each other, she claims that the 78-year-old host “doesn’t do intimacy.”

As for Trump, she calls him “totally creepy. He was sadistic in a deeply disturbing way.”