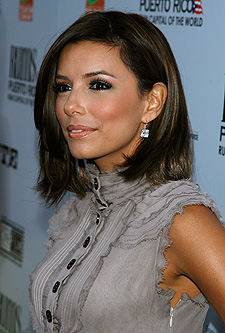 "I love how everybody would think I have a sex tape," Eva tells "Extra" exclusively.

The "Desperate Housewife" has been embroiled in controversy since a mock video she made hit the web and caused several tabloids to report it was real.

But Eva gave "Extra" the inside story behind the tape, saying there definitely wasn't any hanky-panky involved!

"Will Ferrell's company, which is funnyordie.com, asked if I would do this skit on their website," she explained. "And I was like, 'Yeah, it will be fun!'"

Photos: Eva Longoria Through the Years!

The entirely scripted video was filmed with actor Eric Christian Olsen, who plays a hunky socialite named Perry Hilton. The two clown around on a bed in that infamous green night vision. The two ate turkey sandwhiches, read in bed and staged a pillow fight!

"It was released on Monday, and they've had half-a-million hits in the first day," Eva said.
In fact, it's now one million hits, Eva! And the tape has generated shocking headlines for the newlywed.