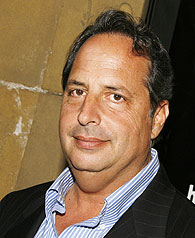 They starred together in the hit TV show, “Newsradio,” but Jon Lovitz and Andy Dick are definitely not friends!

Jon is exclusively telling “Extra” that he did in fact recently punch out his former cast mate at The Laugh Factory in Hollywood.

“I shoved him a couple of times vigorously up against the wall,” Jon revealed to us. “It felt good, it felt great. He’s just a pure, unadulterated jerk.”

Jon and Andy are keeping mum for now on what sparked the intense feud.