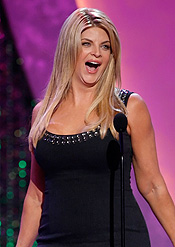 Has Kirstie Alley gained back the weight she so famously lost on the Jenny Craig program?

Rumors are swirling that Kirstie lost her weight battle after the actress was spotted looking heavier in recent pictures.

It didn’t help that in her newest Jenny Craig commercial, she’s seen sitting down behind the wheel of a car.

But Jenny Craig herself is telling “Extra” those rumors are absolutely false!

“She’s still 75 pounds lighter than when she started the program,” Jenny said.