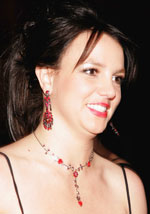 As Britney Spears quietly checked out of rehab in Malibu Tuesday night, she used a decoy to attend an AA meeting in the L.A. suburb of Topanga.

That’s right. Fresh out of rehab, the pop princess is already tricking the pesky paparazzi to enjoy her sobered freedom since checking out of the Promises treatment center.

And now “Extra” has this plea from Brit’s aunt, Chandra McGovern, about Spears’ next step.

Britney’s aunt spoke with us alongside the pop princess’ cousin Miranda by her side on their Mississippi porch, and dished that at one point things were so bad that Brit’s family feared she would self-destruct.

“That was my first thought; worried about if she was going to drug overdose or get in a car accident, or what was going to happen because of her wild behavior,” Chandra said.

After several failed attempts, Chandra is encouraged that Brit was able to spend an entire month in rehab.

“The continuous partying and the abuse that she's doing, and the half nudity the way she's dressing and showing herself... it's not good,” her aunt pointed out.

And only “Extra” got this reaction to Brit’s release from rehab from a source close to Brit’s ex, Kevin Federline, who claims he’s “not about to return the kids as a reward for completing rehab. She’ll have increased custody as long as she demonstrates she’s living life with the best interests of her children.”

Once Britney’s family is in order she’ll be able to focus on a career comeback.

And the man in charge of that comeback is four time Grammy nominee Sean Garrett, who told “Extra” that Britney expressing herself may help her to find herself again.

“I’ll let her tell the story that she wants to be told to the world,” Garrett dished. “Basically my job is to just give her hit records.”

And as her aunt expressed, the world is willing to forgive and forget Britney’s mistakes and more than ready for Brit to reign as pop princess once again.

“We go through the excitement and the disappointments of her doing good, or oh she's gone wild now,” her aunt shared. “But she's still Britney here; everybody still loves her.”