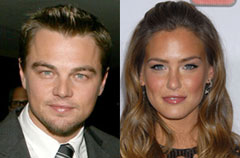 It’s a near riot in Israel and super sexy Hollywood hunk Leonardo DiCaprio is stuck in the middle of the mayhem.

The superstar and his girlfriend, model Bar Rafaeli, were pummeled by shutterbugs as they visited the Western Wall in Jerusalem.

And “Extra” snapped up this shot of Leo shielding himself with a baseball cap and a book as he fled for his own safety.

But the madness didn’t stop there; Leo and his leading lady were then pushed into a waiting white van for safety as her father reacted angrily to the media madness.

Facing shouts and rabid photogs, Leonardo was just inches away as his bodyguards scuffled with the shutterbugs.

The brawl then got so big that two members of Leo’s security team taken in for questioning after allegedly attacking a news photographer; they were later cleared.

Luckily, Leo and Bar were able to speed off unharmed, and return to his girlfriend’s parents house where they’re staying.

The small house is under heavy security as an army of paparazzi lay siege as the supermodel and superstar’s trip to her native homeland continues to get massive Israeli TV coverage.

And this news just in: “Extra’s” learned that a restraining order has now been issued against the shutterbug that started chasing Leo and Bar in a tunnel under the Western Wall.