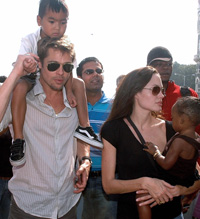 “Extra” spotted superstar Brad Pitt on set Thursday in New Orleans, where he brought along the other lady in his life: daughter Shiloh.

Ever the doting daddy, Brad carried 9-month-old Shiloh on his shoulders and proudly showed her off to on-set admirers.

We just hope she didn’t get a peek at Brad’s steamy smooch with his co-star, Cate Blanchett!

Meanwhile, “Extra” has also confirmed there is a new baby on the way for Brangelina, after Angelina officially filed to adopt a child from Vietnam.

Curiously, Brad’s name is not on the papers, but we have the explanation: since Brad and Angie aren’t married (yet), Vietnam does not allow them to file for adoption jointly.