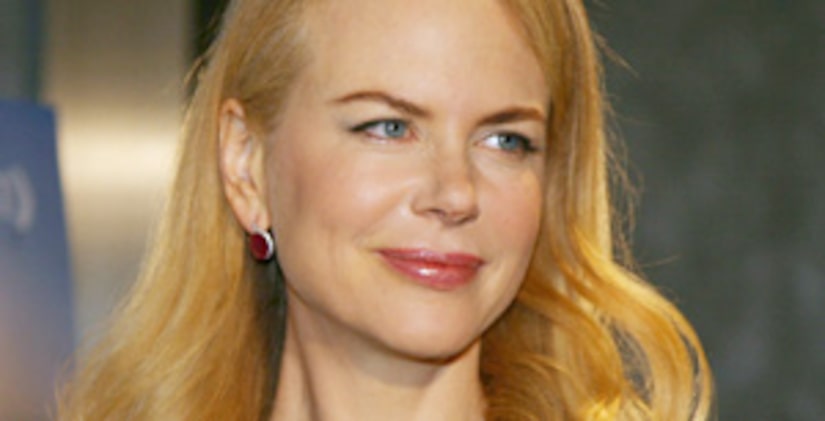 Nicole Kidman was involved in a bone-jarring collision Wednesday night, as a stunt went horribly wrong during filming in downtown L.A.

A Jaguar, with stuntmen on top, slammed into a light pole at 45 miles an hour while shooting a scene for Kidman's sci-fi alien thriller “The Invasion.”

Seconds after, the crew shielded Nicole with a sheet, but the cameras later caught another crew member comforting the superstar as she walked away from the wreckage.

Luckily, we spotted Nicole's hubby Keith Urban on the set when it happened, along with her son, Connor Cruise.

Police told “Extra” that Nicole and two others were rushed to the hospital to be checked out, and the Oscar winner was released two hours later. Thankfully, nobody was seriously hurt.

On Thursday, Warner Bros. released this statement about the harrowing crash:

“There was an accident involving a rigged camera vehicle on the set of 'The Invasion' Wednesday night in Los Angeles. Nicole Kidman was in the vehicle at the time of the accident and was taken to the hospital for evaluation. She was released shortly thereafter.

“No other actors were involved in the scene at the time of the incident. Two additional crew members sustained minor injuries as a result of the collision.

“The production took the appropriate steps following the incident to ensure the safety of the cast and crew. Production resumed Wednesday evening and Kidman will return to the set on Thursday, January 25.”

“Extra” also snapped up shots of Nicole on the set in another scene from her new flick, in which she was wearing a seatbelt.

Recently, the blonde beauty told us about her new role, revealing, “I see it as actually a film about a mother's love for her child.”

“The Invasion” sure gives a whole new meaning to the word “thriller.”