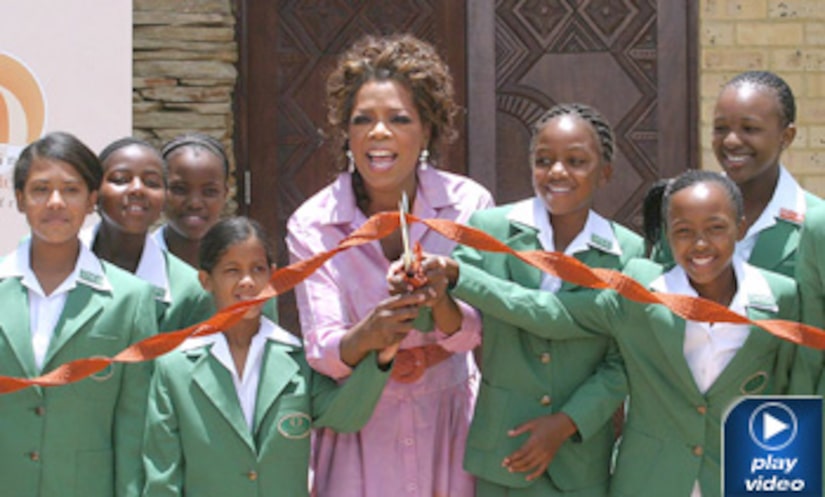 Oprah's magnificent $40 million Leadership Academy for Girls in South Africa is already changing lives, including the life of Oprah herself.

Our Jon Kelley had some alone time with Oprah on Wednesday inside the academy's library, and she talked about everything from starting a family to Madonna and Angelina Jolie's adoptions.

But first she opened up about the millions of dollars she poured into the academy herself.

Queen O also told "Extra" that she had the privilege of handpicking the academy's first 152 students, who may be poor, but are brimming with bright promise for the future.

"I've been in the houses of my girls and opened the refrigerator, where there was electricity, and there's nothing in the refrigerator. Nothing but a jar of curdled milk," Oprah explained.

"I gave the girls a tour of the school and what were they most excited about? The bathrooms, running water -- like gleeful, joyous, screaming, shrieking over the water, flushing the toilet so many times that it broke," she continued.

Oprah calls the young girls "her daughters," and they refer to her as "Mum."

But will she ever officially adopt one of them as her own?

"No, no, no, no, because I want them to still be connected to their families," Oprah told us.

However, Oprah does give a hand to the celebrities who have chosen the adoption route.

"I applaud anybody who does anything to save a child's life," she said. "When somebody like Brad and Angelina, you know, their little family is a little United Nations. I think, what an amazing thing to grow up in a family where you have an Asian child, a Caucasian child, a black child. I think that's the world."

"I think for Madonna and her family to decide that, 'We're going to take this little black child,' I couldn't even understand. It was just craziness to me that people would be complaining about that," Oprah admitted. "You're making life better for that child."

And nobody knows how to use their fame and fortune to changes lives better than Oprah!