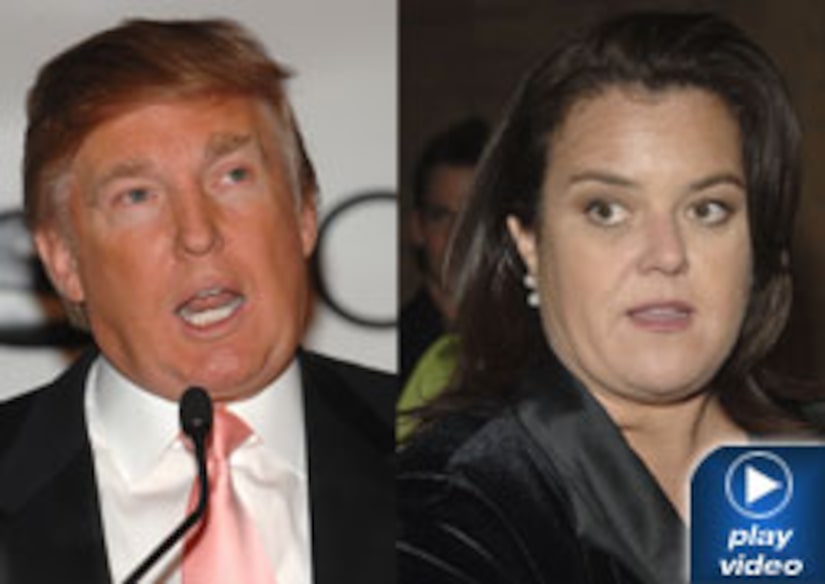 Only “Extra's” got the war of words between Rosie O'Donnell and Donald Trump, and their hot exchanges put the Scrooge to shame!

We've got both sides of the Rosie-Trump battle, which started Wednesday on “The View” when Rosie bashed The Donald's Miss USA melodrama, calling it a publicity stunt.

“I think everything Donald does is a ploy to promote the Trump business,” Rosie touted. “I don't think he really cares about this young girl.”

Things aren't looking so rosy after Rosie's accusations, with Trump threatening to sue over her comments about his finances.

“Is there going to be a lawsuit? There might be,” Trump told “Extra.” “She said I went bankrupt.”

It appears Donald believes he has the upper hand in the bitter brawl, promising, “I'm going to have a lot of fun with Rosie.”

On Thursday's “The View,” O'Donnell was characteristically tight-lipped about the controversy, while The Donald got fired up as he told “Extra” that Rosie's boss, Barbara Walters, is upset with her.

“Barbara Walters called me,” Trump revealed. “She was terrific. She said a lot of things that I won't reveal now, but Barbara Walters, I think she has her hands full with Rosie.”

The real-estate mogul also got personal during the mud-slinging, dragging Rosie's love, Kelli, and their kids into the brawl.

However, on Thursday's show, Rosie did respond to Trump's threat to send a man to steal Kelli from her.

“I made sure Kelli was here today so nobody with a comb over would try to steal her,” she said.

But is an end to this contorted combat near?

“No, it will never be resolved. I'll never like Rosie,” Trump promised.

As for Miss USA, “Extra” has learned that she left New York for Pennsylvania Thursday for three weeks of rehab, and The Donald told us she's doing well.

“She's a terrific person, despite what Rosie said,” he told “Extra.” “Of course, I'm sure Rosie would like to kiss her goodnight.”