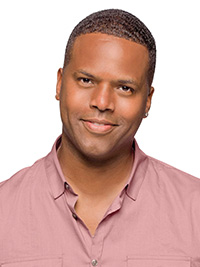 "Extra" co-host and New Jersey native AJ Calloway is at the center of all things entertainment in the Big Apple, interviewing the most talked about celebrities, athletes and notables in the world.

AJ, a favorite among the stars, has traveled the globe interviewing top celebrities for "Extra" in places like Dubai, Morocco, South Africa, Cuba and London.

Calloway, along with his "Extra" family, won an Outstanding Entertainment News Program Daytime Emmy in 2014 and another in 2016.

AJ began his television career in New York as a co-host on "106 & Park," B.E.T's top 10 live show with a mix of celebrity guests, live performances and the hottest videos selected by viewers.

It was B.E.T's most popular show to date and earned the network record-breaking ratings. In fact, the show became the number one video show in America, knocking MTV's "TRL" out of that position, due in part to AJ's interviewing technique, charisma, style and down-to-earth personality.

AJ believes in giving back to the community. He serves on the Dean's Advisory Board for the Rutgers New Jersey Medical School, and he has his own foundation called Building the Bridge, which offers scholarships and mentors for college students.

At Howard University, AJ's alma mater, he taught a graduate course on Hip Hop culture and its relation to public history – the university's first course of its kind. Calloway is also a proud and active life member of Omega Psi Phi Fraternity Inc.

AJ has clearly established himself as a true entrepreneur. He owns and operates Calloway Entertainment Group, a production, marketing, promotions and event-planning company, and also serves as a consultant to many companies as a celebrity brand ambassador. In his spare time, Calloway is a laid-back guy who enjoys traveling and relaxing on the beach with his wife and three children.