“Extra’s” Mario Lopez sat down with Scott Foley at Universal Studios Hollywood, where he promoted his show “Whiskey Cavalier.”

Foley’s wife Marika Domińczyk is also acting on the show. He dished, “I called Warner Bros. and I said, 'Hey, we're shooting a show in Europe. My wife is Polish, speaks fluent Polish. She's gorgeous. What if she was on the show?' And they said, 'If you move to Prague, we'll do whatever you want.’”

Foley also shared an interesting tidbit about the show, pointing out, “We’re the first network U.S. show to shoot full-time in Europe.” 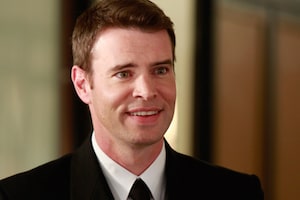 Scott Foley: 'I Know Exactly What Happens Between Jake and Olivia' on 'Scandal'