Here's what you have to do: Follow @ExtraTV, if you're not doing so already. Retweet that day's contest message, which will be posted on the @ExtraTV Twitter page, within 48 hours of it being posted. We'll announce the winners on the @ExtraTV Twitter page. If it's you, make sure to send a direct message via Twitter to @ExtraTV within 48 hours. All entries must be received by 4:00 p.m. PST on September 8, 2016 Limit one entry per person/Twitter address. Read on for official rules… 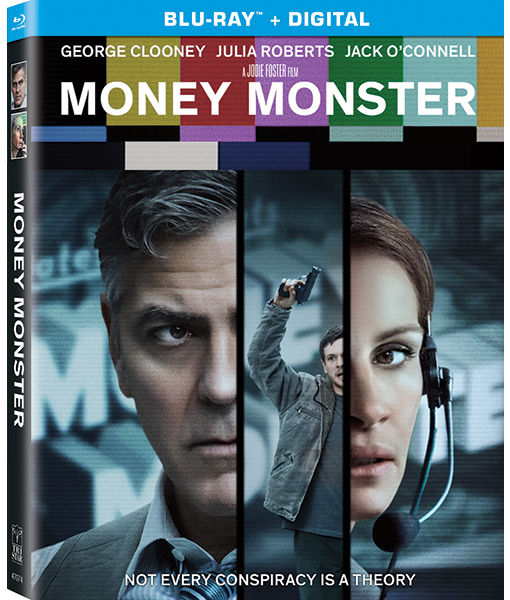 DESCRIPTION OF GIVEAWAY:
Via online method only, entrants will have the opportunity to win one (1) blu-ray + digital copy of “Money Monster.” ("Prize"). Entrants must be a follower of @ExtraTV on Twitter.com and must retweet the contest message Tweeted by @ExtraTV which will be posted on the @ExtraTV Twitter page. Entries will be accepted starting at 4:00 p.m. PST on September 6, 2016 until 4:00 p.m. PST on September 8, 2016.

ELIGIBILITY:
The Sweepstakes is open to legal residents of the United States (50 states and District of Columbia, but specifically excluding the territory of Puerto Rico) who are aged eighteen (18) and over as of the date of entry. Employees of "Extra TV", Telepictures Productions Inc., EXTRATV.com, Time Warner, Warner Bros. Entertainment Company, L.P., and/or the entity or entities supplying the Prize or Prizes for any given Sweepstakes, and each of their respective partners, parent companies, divisions, subsidiaries, affiliates, advertising, promotion and public relations agencies and their respective officers, directors, employees, representatives and agencies (collectively, the "Sponsor Affiliates") are not eligible to participate in the Sweepstakes and/or win a Prize. Additionally, relatives of such employees are not eligible to win. For the purposes of this Sweepstakes, relatives are defined as spouse, domestic partner, mother, father, in-laws, grandmother, grandfather, brother, sister, children and grandchildren. In addition, you are not eligible to participate or win a Prize in this Sweepstakes if you have been involved in the development, production (including Prize suppliers), implementation and distribution of this Sweepstakes or any Warner Bros.' websites.

PRIVACY:
Except as otherwise stated in these official rules, the use of the information each entrant submits in this Sweepstakes is governed by Warner Bros.' Online privacy policy, which can be found at http://www.warnerbros.com/#/page=privacy-policy/.

HOW TO ENTER: To enter, visit www.twitter.com and become a follower of @ExtraTV. Then, retweet the contest message Tweeted by @ExtraTV, which will be Tweeted on the @ExtraTV Twitter page. Winner will be notified via the @ExtraTV Twitter handle. You will be required to contact ExtraTV by direct message via Twitter within forty-eight (48) hours of @ExtraTV tweeting that you are a winner. All entries must be received by 4:00 p.m. PST on September 8, 2016. Limit one (1) entry per person/Twitter address.

PRIZE SELECTION AND NOTIFICATION:
This is a game of chance. Odds of winning are based on eligible number of entries. Winners will be selected at random using an independent auto-generated selection process available at http://www.random.org/integers/. Winner notification will be completed on or about May 16, 2016. Potential winners will be notified by a Tweet from the @ExtraTV page on Twitter.com and asked to direct message their contact information. If any winner notification remains unanswered for more than forty-eight (48) hours, the prize will be forfeited in its entirety and an alternate winner will be selected. The Prize is not transferable; no prize substitutions or cash alternatives are allowed except as may be determined by Sponsor in its sole discretion.

WINNERS/PRIZE:
One (1) prize will be awarded for this Sweepstakes. Approximate retail value ("ARV") of the Prize will vary by Sweepstakes, but in no event shall such Prize be valued equal to or more than five thousand U.S. Dollars. No transfer, cash equivalent or Prize substitution allowed, except at Sponsor's sole discretion. Sponsor may require winner(s) to sign an affidavit of eligibility and liability/publicity release (as more fully discussed below). Decisions made by Sponsor are final in all matters, including interpretation of these official rules and awarding of the Prize(s). If legitimately claimed, the Prize(s) will be awarded. In no event will more than the stated number of Prizes be awarded. All expenses not specified herein, including, without limitation, all federal, state and local taxes, are each winner's sole responsibility.

ODDS OF WINNING:
The odds of winning depend upon the number of eligible entries received.

LIMITATION ON LIABILITY / DISCLAIMER / OTHER REQUIREMENTS:
All entrants, as a condition of entry, agree to be bound by these official rules and the decisions of Sponsor. Except where prohibited by law, by entering a Sweepstakes, each entrant consents to the use of his/her name, voice, picture, likeness and biographical data and/or any other information contained in his/her entry in advertising, promotional and marketing materials by Sponsor and the Sponsor Affiliates without additional compensation, which may require, without limitation, winner to appear in person on a television, radio or Internet broadcast. In addition, by entering, all entrants, except where prohibited by law, consent to being photographed, filmed, taped and/or interviewed about the Sweepstakes. In connection therewith, all entrants grant full permission and consent to Sponsor and the Sponsor Affiliates to utilize any of the results of such photographing, filming, taping and/or interviewing in any and all media now known or hereafter devised and hereby release Sponsor and the Sponsor Affiliates from all liability related thereto.Winners may be required to sign, have notarized and return an affidavit of eligibility and liability/publicity release within ten (10) days of receipt of such document(s) or Prize will be forfeited. All Prize claims and winner materials will be verified by Sweepstakes judges. If this Sweepstakes is not capable of running as planned, including, because of any infection by computer virus, bugs, tampering, unauthorized intervention, fraud, technical failure or other cause beyond Sponsor's control which corrupts or threatens to corrupt or adversely affects the administration, security, fairness, integrity or proper conduct of the Sweepstakes, Sponsor reserves the right, in its sole discretion, to cancel, suspend and/or modify this Sweepstakes and Sponsor can perform the random drawing from among all eligible entries received prior to such cancellation, suspension or modification of the Sweepstakes. Winner, by acceptance of any Prize, agrees to release Sponsor and the Sponsor Affiliates from any and all liability, claims or actions of any kind whatsoever for injuries, damages or losses to persons and property which may be sustained in connection with the receipt, ownership or use of any Prize or while traveling to and from a location to obtain or use any Prize. Further, no responsibilities are accepted for any additional expenses, omissions, delays, re-routing, or acts of any government or authority. Neither Sponsor nor the Sponsor Affiliates make any warranty, representation, or guarantee, express or implied, in fact or in law, relative to the use of any Prize including, without limitation, quality, merchantability, or fitness for a particular purpose. Neither Sponsor nor the Sponsor Affiliates are responsible for technical, hardware, software, or telephone malfunctions of any kind, lost or unavailable network connections, or failed, incorrect, incomplete, inaccurate, garbled or delayed electronic communications caused by Sponsor or the Sponsor Affiliates, the user or by any of the equipment or programming associated with or utilized in this Sweepstakes or by any human error which may occur in the processing of the entries in this Sweepstakes and which may limit a participant's ability to participate in this Sweepstakes. Entries that are incomplete, illegible or corrupted are void and will not be accepted. Any person who supplies false information, enters by fraudulent means, or is otherwise determined to be in violation of these official rules in an attempt to obtain any Prize will forfeit the Prize won and may be prosecuted to the fullest extent of the law. The Sweepstakes shall be governed by, construed and enforced in accordance with the laws of the State of California. Any action by entrant or any third party brought to enforce these rules or, in connection with any matters related to the Web Site shall be brought only in either the State or Federal Courts located in Los Angeles County, California, and you expressly consent to the jurisdiction of said courts. Each entrant further agrees to not knowingly: damage or cause interruption of the Sweepstakes; prevent others from using the Sweepstakes; or obtain or modify another user's non-public account information without their consent. Submission of an entry is acknowledgment of and agreement to be bound by all terms and conditions of these official rules. In the event of a dispute concerning who submitted an entry, the entry will be declared to have been made by the authorized account holder of the e-mail address affiliated with the Twitter handle that submitted the entry at time of entry. An authorized account holder is defined as the natural person who is assigned to an e-mail address by an Internet access provider, online service provider, or other organization (e.g. business, educational institution, etc.) that is responsible for assigning e-mail addresses for the domain associated with the submitted e-mail address.

CAUTION: ANY ATTEMPT TO DAMAGE ANY ONLINE SERVICE OR WEBSITE OR UNDERMINE THE LEGITIMATE OPERATION OF THE SWEEPSTAKES VIOLATES CRIMINAL AND/OR CIVIL LAWS. IF SUCH AN ATTEMPT IS MADE, SPONSOR MAY DISQUALIFY ANY SWEEPSTAKES ENTRANT MAKING SUCH ATTEMPT AND SPONSOR MAY SEEK DAMAGES TO THE FULLEST EXTENT PERMITTED BY LAW.Sponsor can modify these official rules in any way or at any time, as long as Sponsor gives reasonable notice.
EXTRATV.COM and all of the related pages, contents and code are © 2016 Telepictures Productions Inc. In partnership with Warner Bros. Entertainment. Copying or unauthorized use of any copyrighted material or trademarks without the express written consent of its owner is strictly prohibited.