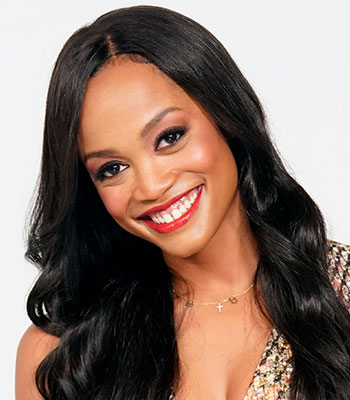 Rachel Lindsay is an attorney, media personality, podcaster, guest host, and speaker. She is currently a correspondent with “Extra,” host of MTV’s “Ghosted: Love Gone Missing,” host of The Ringer’s “Higher Learning with Van Lathan and Rachel Lindsay”podcast, and host of the “Bachelor Happy Hour” podcast. She recently created #honestlyrach, a monthly blog on her website dedicated to answering questions about love, social issues, careers, and life.

She is best known for her role as the first African American lead in the history of “The Bachelorette” after starring in Season 13. She also appeared as a contestant on Season 21 of “The Bachelor.”

Previously, she worked as a guest host for ESPN’s flagship show, “First Take, Sports Center” on Snapchat, and ESPN’s social media channels, such as Twitter and Instagram. She worked as a guest host for NFL Network on television, digital media platforms, and the red carpet. She has co-hosted ESPN Radio’s “Game Night, Football Frenzy” and “GTL,” and the NFL’s Amazon Prime show “The Drive.”

Rachel was a frequent contributor to “The Steve Harvey Show” and “Strahan, Sara & Keke.” She has worked as a collegiate basketball sideline reporter for Conference USA and Stadium. Prior to sideline reporting, Rachel worked for the Milwaukee Bucks Inc., the National Basketball Association, the National Sports Law Institute, Rice University Compliance Department, the University of Texas at Austin’s Media Relations Department, and Capital Sports and Entertainment.

Rachel obtained her undergraduate degree at the University of Texas at Austin in sports management, then went on to receive her law degree from Marquette University Law School in Milwaukee with a concentration in sports law. Driven and passionate about her career, Rachel worked at the prestigious law firm Cooper & Scully, P.C. in Dallas. She represented clients in a broad variety of litigation matters in state and federal court, including local government law, personal injury, employment, sports/entertainment, and insurance defense.

Outside of her legal practice and broadcasting, Rachel is an ambassador for the College Football Playoff Foundation, Paw Works, and NoBully.Org.

Rachel is an avid sports fan who enjoys music, dancing, exercising, reading, and spending time with family, her dog Copper, and her husband Bryan. She currently resides in Los Angeles and Miami.

New Details on What Killed Model Stefanie Sherk at 43 6

Why Kim Cattrall Never Had Children, Plus: Her Relationship with 'Sex…