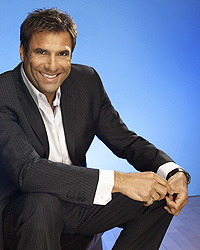 Multiple Emmy award-winner Jerry Penacoli has served as a correspondent for "Extra" for the past 18 seasons. For the show's 25th season, Penacoli will be called upon to cover many of the show's high-profile and exclusive interviews. A respected journalist, he has also been a host for E! Entertainment Television and received a Daytime Emmy nomination for his excellence in reporting.

Penacoli began his career at WJKS in Jacksonville, Florida, as a general assignment reporter and news anchor. He quickly garnered the attention of WTVJ in Miami, where he served double duty as host and co-producer of "PM Magazine." Penacoli went on to KYW-TV in Philadelphia, where he was named main anchor of the prime newscasts and host of the live morning talk show, "People Are Talking." As a result of hosting, reporting, producing and directing, Penacoli earned six Emmy awards. He also garnered the Iris National Programming Award for his on-camera work and was named Best Host at the International Television Film Festival.

After nearly a decade in Philadelphia, Penacoli moved to New York to co-host the national talk show "Attitudes" with Linda Dano on Lifetime. While there, he says he "caught the acting bug" and began working on stage off-Broadway and did several soap stints including "One Life to Live."

Penacoli relocated to Los Angeles in 1992 and won roles on CBS' "The Bold and the Beautiful," and NBC's "Santa Barbara," CBS' "The Young and the Restless" and NBC's "Days of Our Lives," for which he is often recognized for his compelling portrayal of the character "Miles Malloy."

Penacoli has guest-starred on several major television shows, including ABC's "The Practice," the sitcoms "Cheers," "Ellen" and a guest-starring role in the 2007 season finale of "Stargate Atlantis." Additionally, he appeared opposite Dwayne Johnson aka The Rock, at the 2007 World Stunt Awards.