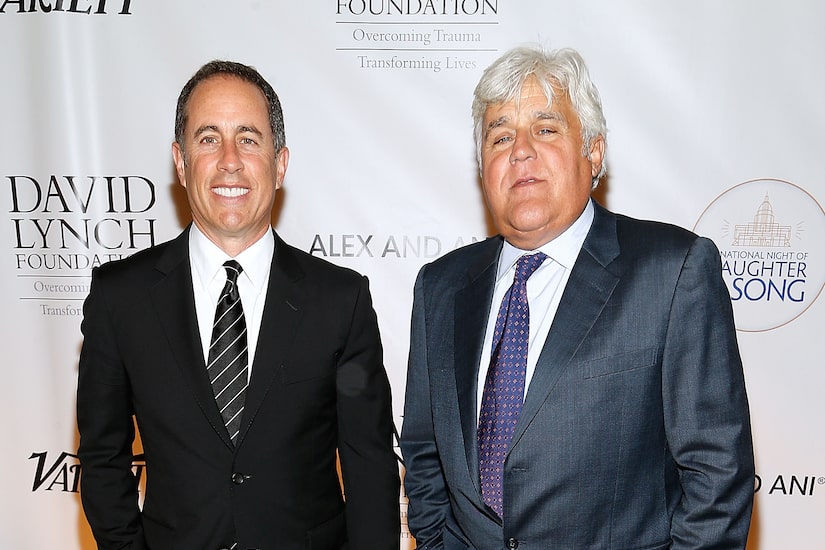 Jerry Seinfeld has been in showbiz for four decades!

“Extra’s” Billy Bush spoke with Jerry about his fellow friend and comedian Jay Leno, who was just released from the hospital after sustaining burns to his face and hands in a freak accident.

Jerry noted that he recently talked to Jay, who is “fine.”

Jerry has been looking fit, thanks to his movie “Unfrosted,” which has him acting and directing.

The movie centers on the untold story of the Pop-Tart wars!

When Billy complimented Jerry for being the “best looking 68-year-old I have ever seen,” the comedian quipped, "That is some showbiz BS if I ever heard it.”

Would Jerry ever consider hosting the Oscars?

He answered, “Well, next year, I have a movie coming out, so I’ve been in the movie business.”

Jerry did leave the door open, though, saying, “Maybe then, [I could].”

Seinfeld is also celebrating a new book, “The Comedians in Cars Getting Coffee Book,” which features transcripts and hilarious conversations.

The cover of the book features a “great shot” of Eddie Murphy laughing. Jerry noted, “What a great moment in my comedy life, getting a big laugh outta Eddie Murphy.”

When asked if his fellow “Seinfeld” co-star Michael Richards could ever get another shot at being a comedian again, Jerry said, “I hope so.”

Jerry still talks to Michael, saying, “A guy like that, like almost all of us, always has to be in the right context... A lot of comedy is context.”

Jerry started drinking coffee after doing his show “Comedians in Cars Getting Coffee.”

Jerry also makes coffee for Jessica, his wife of 22 years. He stressed, “That morning coffee moment, I can’t wait to go to bed ’cause I know in the morning she’s gonna sit with me and I might find out something that’s going on in my life.”

Seinfeld also revealed how he makes his coffee, saying, “I have a fancy Italian machine that makes espresso.”

Another way he likes to make his coffee is using a mocha pot, which requires some skill. He noted that once someone learns how to use the appliance, the coffee comes out “sensational.”

During their chat, Billy did an impression of Jerry. Jerry commented, “When you do me, you’re funny… when you put that thing in your voice.”

Jerry pointed out, “I do this thing, all my shows, I take questions and somebody asked me the other night… Does your voice really go up high like that when you’re upset? I go, ‘You mean like this?’ Yeah, it’s real.”