Actress Amy Adams is back as Princess Giselle in “Disenchanted,” the “Enchanted” sequel that’s been 15 years in the making!

Maya was a huge fan of the original and was “genuinely starstruck” when she saw Amy as Giselle. She said, “I got to work one day and Giselle was there and I get excited like I was talking to a real princess.”

Gabrielle, who was “like 5 or 6” when the original movie came out, said, “It brings out that nostalgia.”

Adams felt “wonderful” to be able to reprise her role again. She admitted, “When I walked away from her 15 years ago, I didn’t know if I’d ever get to embody her again, so getting to put her back not only on but in my body was just such a joy to get to feel her spirit again. She’s just very intoxicating for me. I feel like I sort of get drunk with Gisele’s love and joy and spirit, and so it was just such a joy.”

Amy has even slipped into her character in real life, saying, “I sing out the window to my daughter sometimes.”

Amy’s daughter Aviana was also in one scene of “Disenchanted.” She dished, “Avi’s in the market scene, the dragonfruit scene — she walks by.”

Maya quipped, “If you want to come to set, you gotta dress up, you gotta work for it… It’s the dream.”

In “Disenchanted,” Giselle and her family move to the suburbs, but a wish gone wrong casts a spell that turns her into a wicked mother.

Amy shared, “She makes a wish that the world could be more simple like a fairy tale, and then she realizes that perhaps it’s not so simple and she learns she has to grow and evolve to see her happily ever after.”

Rudolph noted, “She wants to be the Queen Bee of the town and win the popularity contest… She’s the head of the PTA and does not want to be challenged.”

Maya said she had “fun” playing Malvina! “Every behavior is worse than the next. To me, that’s very joyful because it’s so funny and ridiculous… She just wears workout clothes and she doesn’t work out.”

She joked, “I’ve never done that… I can’t relate to that.”

“Disenchanted” is streaming on Disney+ now. 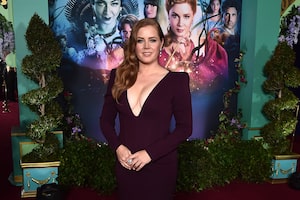