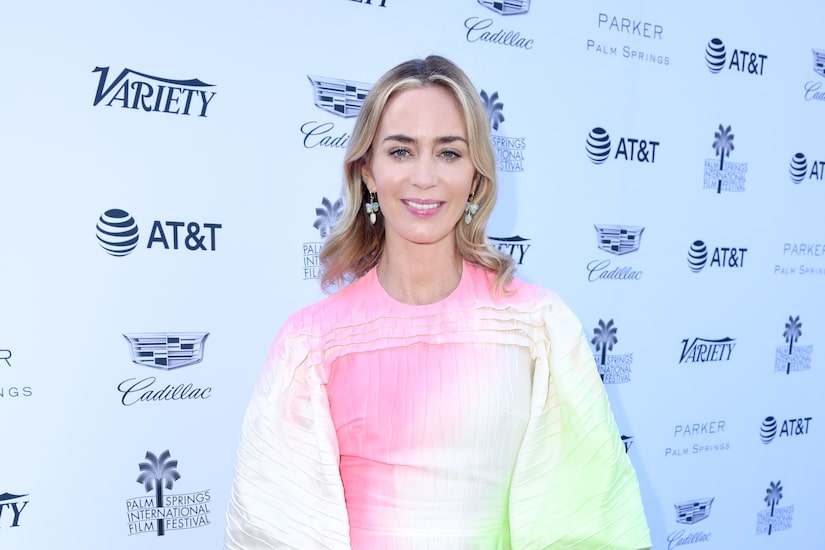 Actress Emily Blunt isn’t exactly saying “no” to joining the MCU alongside husband John Krasinski! In fact, she loves all the fanart calling for them to play the Invisible Woman and Mr. Fantastic.

“Extra’s” Katie Krause spoke Emily,  who addressed the “Fantastic Four” rumors, as well as her new Amazon series, “The English” alongside Chaske Spencer.

Of the rumors that she could play Invisible Woman, Blunt commented, “Well, I know nothing! I never know how to answer these questions…No one has approached me about the Invisible Woman so we'll just leave it as that.”

Would she be interested? Emily answered, “I don't know, I don't know! I'm always very touched by the fan casting. I think that's cool.”

Blunt was also tight-lipped about possibly appearing in the upcoming “A Quiet Place 3.” When asked if she would be in it, Emily said, “I can't say, I can say nothing... I can't wait for ‘Quiet Place 3’ though.”

Emily was able to talk about “The English” though! She said, “It's a true epic, you know, wide scope love story… it's so beautiful and I'm thrilled people love it…Obviously you sort of make these things in the great hope that they're going to be absorbed and loved in the way that they were made…It was made with so much love and so much care and I knew when I read it, it was something extraordinary.”

As for what fascinated them about this western story,  Chaske noted it was the characters’ love story, saying, ”It was Cornelia and Eli – it was the the story between those two… that's what got me… I kept turning the pages, wanting more and more.”

Emily added, “I’ve never done a western before…Chaske had done a couple of westerns but I've never played in that sort of mythic story space before…I grew up watching westerns and I felt this one was fresh, I felt this one was carving out new space for itself…I thought it was as violent as it was witty and yet it was moving and so you just never knew where it was going or where it was going to take you or how you're going to feel about it.”

Emily also explained how being a mom in real life prepared her for this role. She said, “Honestly, I feel most parents will feel like me… you become a parent and your whole heart cracks open, to so much…I think it has opened my eyes to so much… I don't tend to draw on my own experiences when I play a part or maybe I do subconsciously, but I'm not aware of it…I'm not aware of going, ‘well this is what I've been through…So I'm going to inject that into this character.’”

She emphasized, “I just had such huge empathy for her plight and the tragedy of her loss and the identity that's been stripped from her and I thought she was so relentless in this pursuit of revenge…And I understood it, I guess I just understood it so deeply…I've never been through something as traumatic, you know, touch wood as what she has gone through…but I loved that relentless fever she had for it.

“The English” is out now on Amazon Prime.